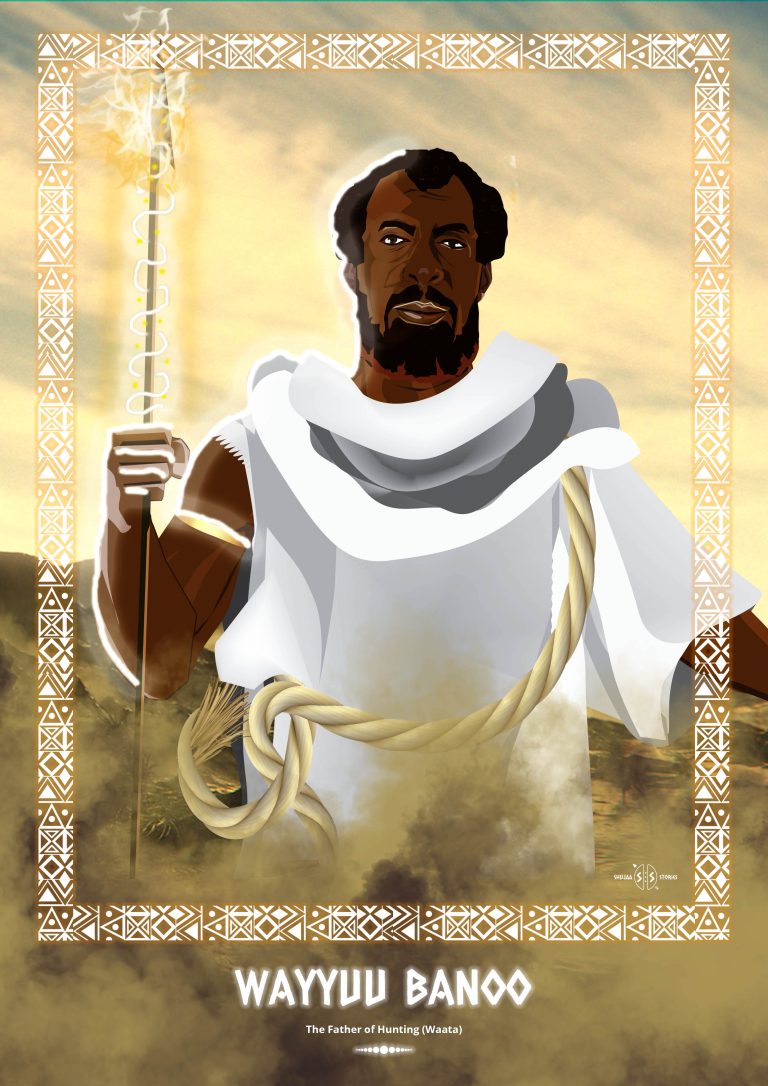 The Father of Hunting (Waata)

The Waata (Waat, Watha), or Sanye, are Oromo-speaking people of Kenya. They are also former hunters and gatherers who are mainly found in Lamu District, in Tana River.

According to Waata legend, there lived a rich ancestor called Wayyuu Banoo who out-witted Waaqa, the Oromo Sky-God, in a game of checkers. The myth explains how Wayyuu Banoo, a rich stock owner, challenged a visiting stranger to a contest of wealth whilst playing the local version of the game of checkers.

The stranger, who was none other than Waaqa himself, punished Wayyuu for his arrogance by totally wiping out his herds except for one billy goat.

When Wayyuu realised his mistake, he asked for Waaqa’s forgiveness and help in his predicament. Waaqa not only forgave Wayyuu but he also bestowed on him the skill needed to fashion a bow and an arrow and to make poison for the arrow. He then instructed Wayyuu to sacrifice the remaining billy goat.

Wayyuu became the father of the hunting tradition of the Waata. They consider hunting a divine gift, whose values they continue to transmit to the younger generation through these symbolic means.

Waata consider most wild animals (Bineensa) their exclusive ‘property’. According to the myth, it was the Oromo Sky-God, Waaqa, who gifted these animals to the Waata. They commemorate this event annually by sacrificing a billy goat and performing songs and dances in honour of the elephant and other animals that they once hunted.

Wayyuu Banoo, apart  from being the founder of Waata, is attributed with establishing the first Qaalluu (shaman-priest). Due to this association with the Qaalluu, the presence of Waata among the larger Oromo rituals is highly valued. They play an indispensable role in all life cycle and transition ceremonies, and are rewarded with specific parts of the animals sacrificed by other members of Oromo such as Borana or Gabbra.

The Tana River Delta is an Important Bird Area (IBA) and a Global Biodiversity Hotspot. The Tana Delta is also part of the Coastal Forests of Eastern Africa. It’s ecosystem is thus of global importance in biodiversity conservation.