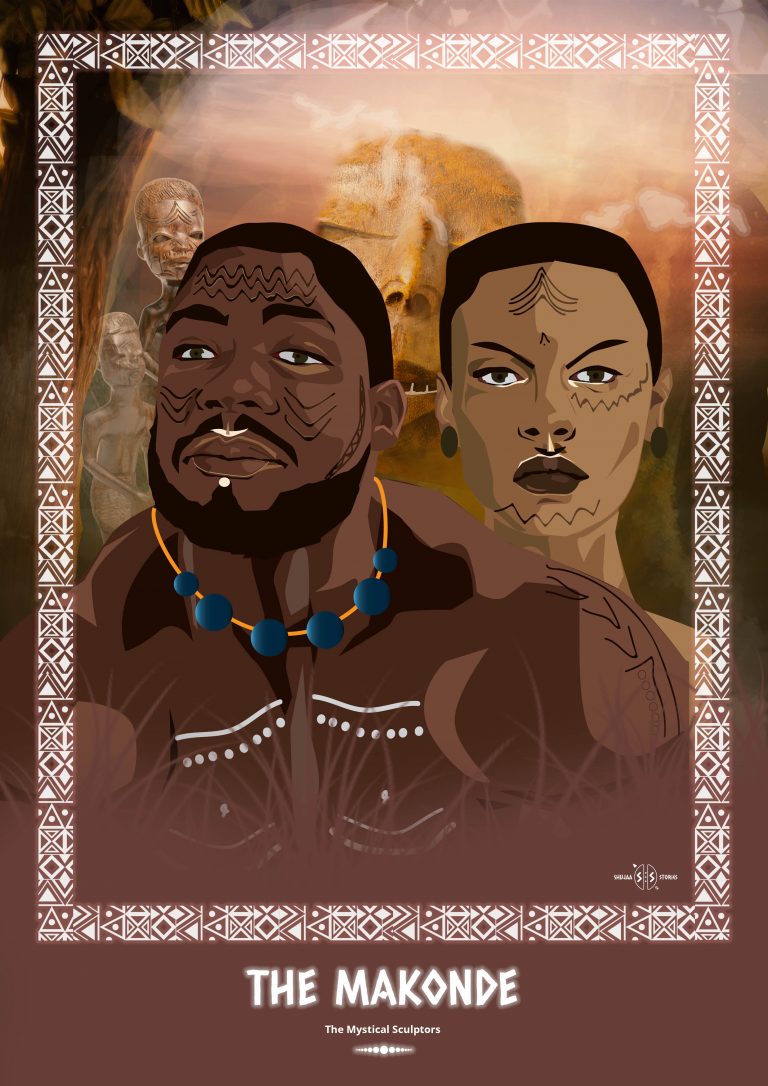 Have you ever met someone who is always on the move, you wonder when they sleep? That’s a fitting description of the Makonde. Though it is said that they moved around in search of employment, one would rather believe that it was in search of inspiration for their breathtaking art!

The Makonde are originally from Southern Tanzania, and Northern Mozambique, where they still have a large population. The few who kept going eventually settled on the East African coast, in the late 1800s. The Makonde have been on the move, for over 100 years.

The Makonde are renowned for their prowess in wood carving. Their elaborate masks and figurines recount generational stories. And they are also known for their expressive facial tattoos.  The Makonde are a matrilineal society who trace descent through the female line. This is why women have a central place in Makonde sculpture.

Female figurines are common and are usually portrayed in concepts that represent birth and survival of the Makonde. Their breasts and stomachs are engraved with lizards as this reptile is thought to increase fertility in women. The faces of the figurines are adorned with typical Makonde scarification, on foreheads, cheeks, and over the mouth.  By the time the sculptor is done, the figurine is an awesome and bewitching sight!

A mask in the shape of a woman’s head represents the progenitor. This kind of mask is highly spiritual. It is used in worship and to summon spirits for protection through journeys, hardships, maternity and death.  Another highly spiritual mask is the “Mapiko”. These masks are sculpted to embody ancestral spirits during men’s initiation ceremonies and are usually kept in a little temple located in a place secluded from the rest of the village.

Makonde masks are also worn during masquerades, where the masked stilt dancers move in rhythmic strides and symbolic gestures. The dancer wears the mask to hide his identity because it embodies the ancestral spirit of a deceased person, referred to as “Lihoka”.

Makonde sculptors make expressive sculptures. When representing their own people, they create sculptures with fine harmonious features, while their enemies are sculpted with distorted and ridiculous features that make them look grotesque. The Ujamaa style of sculpting has its origin in this kind of carving and represents a Makonde family tree, featuring streams of people engaged in daily activities. It is all carved out of a single piece of wood. A female figure always stands at the top.

Today, in Makonde society, sculptors use their art to educate and create awareness on important issues that affect society. Sculptors create scenes to teach children about values and virtues of daily life with subjects which change to suit the times. The sculptors have developed new styles of spirit-figure carving. Makonde art may have evolved over the centuries but the technique and the mystical effect remains.

The wood carving industry in Kenya is highly dependent on indigenous hardwood tree species which are also preferred for construction and are used in architectural and civil works. These hardwood species take between 100-150 years to mature and include the wood traditionally used by the Makonde carvers that comes from the “African blackwood” or Dalbergia Melanoxylon (Mpingo in Kiswahili). However, over the years, harvesting of these tree species has led to degradation of forests and woodlands. To protect the remaining trees, the harvesting of indigenous hardwoods from public forests has been banned in Kenya.