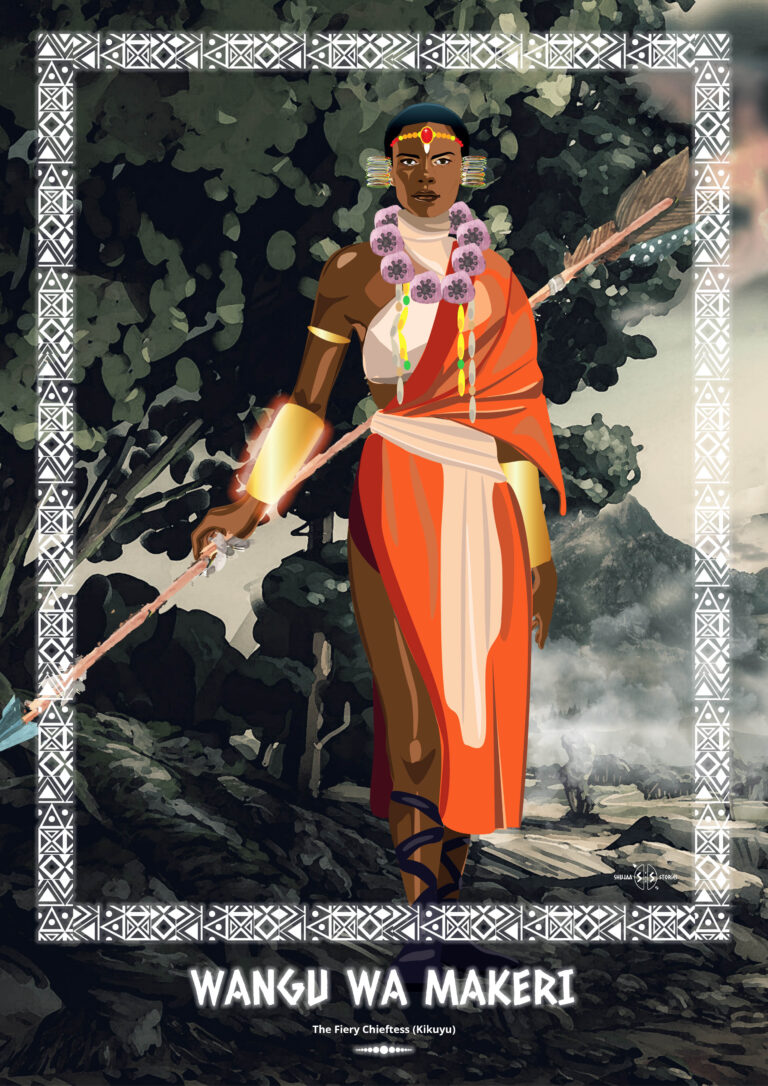 Wangu wa Makeri was was born around 1856 in Murang’a. She had no formal education and ended up working on her parent’s farm as a labourer. It was there that she met her husband, Makeri wa Mbogo. Together, they raised six children. It is said that she entered into a relationship with Karuri wa Gakure, paramount Chief of Fort Hall in today’s Murang’a and a man with 60 wives, who stayed in her family’s home whenever he stopped by in the village where she lived.

When Makeri wa Mbogo learnt about the relationship, Paramount Chief Gakure, in an attempt to appease and silence him, offered him the position of Headman. Makeri declined. The  paramount chief then offered the position to Wangu and she accepted. This was in 1902; a time when the position of Headman as the name suggests was a male-only preserve. Wangu wa Makeri became the first and only female leader of the Kikuyu during the whole of the British colonial period.

By this time the British colonial authorities had begun a taxation system, whose enforcement they passed on to the locals. Wangu became a figure of controversy among her people as the go-between them and the colonial authorities.  She was considered to be a harsh and authoritarian tax collector, who would intimidate tax evaders and subject them to solitary confinement. Wangu would often sit on the backs offenders as they knelt before her in submission.

Her downfall, when it came, was spectacular and sent shockwaves throughout the entire region.  The exact date is unclear but Wangu fell from power at a meeting held between 2nd and 4th June, 1909.

Before the meeting, Wangu had allegedly joined a group of adult men in  dancing the Kibata, naked. This was the ultimate transgression because the Kibata was never to be danced by women. The story goes  that Paramount Chief Gakure had also been part of the dance.

On seeing her lover dancing with abandon Wangu chose to throw caution to the wind, and discarded her clothing to dance provocatively with him. Another explanation for her nakedness is that some conniving male dancers deliberately adjusted her ceremonial sword causing it to cut the strings of her muthuru or traditional skirt which fell to the ground as Wangu danced ecstatically, thus exposing her body. Such was the insult to tradition that Wangu wa Makeri was forced to resign her position. But she retains respect and admiration as a pioneering feminist.

Murang’a is a picturesque and fast growing town with rich natural and cultural history. The place was formerly known as Mbiri. Later with the settlement of the British colonial administrators, a certain Francis Hall built a fort in the town, and the place was effectively known as Fort Hall. Today it called Murang’a. One of the most significant cultural sites in Murang’a is the Mukurwe wa Nyagathanga. The site requires regular rehabilitation to preserve it. It is important to safeguard our cultural sites for the posterity of future generations.