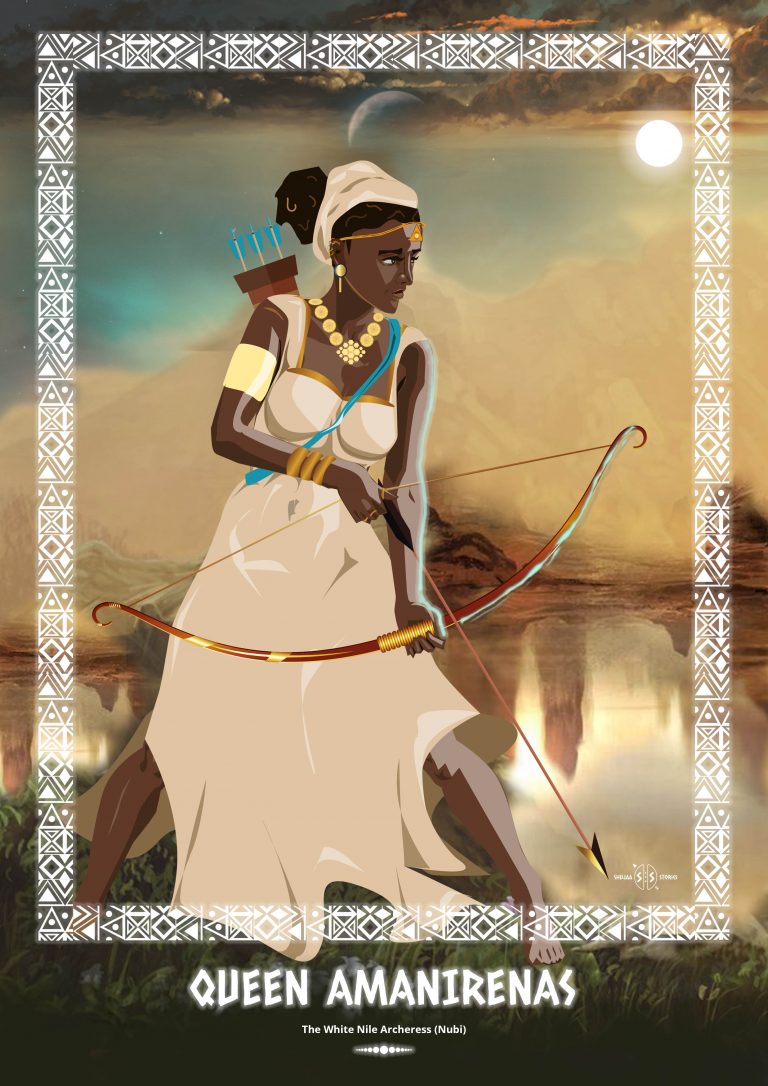 The Nubian community settled in Kibera, Nairobi in 1870. Due to their fearlessness, they were brought to Kenya to serve in the East African Rifles, a regiment of the British colonial armed forces. The eventful and rich history of the Nubi, however, dates back to Sudan.

Sudan was originally known as Kush/Nubia. Egyptians referred to Nubia as “Ta-Seti” which means the “Land of Bows”. Nubian hunters and warriors excelled as archers, and their weapon became a symbol for Nubia. The skill of Nubian archers made them valued members in military forces.

Archery was not limited to men, women too exhibited matching prowess. This gave rise to a number of Nubian women warriors and queens. Among them was the famous Queen Amanirenas of Nubia who conquered the Romans.

Queen Amenirenas, also known as “The One-Eyed Queen” ruled the area between the Nile and the Atbara River. She was born in the 60s-50s BC. Her reign was between 40-10BC. She was the second Queen of the Kush Kingdom, and was popularly known as Queen mother or Kandake, the title given to a ruling queen by the indigenous people.

During her reign, Emperor Caesar Augustus of the Roman Empire defeated the Egyptians and made Egypt one of the provinces under the Roman Empire. He defeated Egypt under the rule of Cleopatra and Marc Anthony. Emperor Augustus wanted to expand his province and pledged to push further south, making Sudan the next target.

Amanirenas’ husband died during an earlier battle, leaving behind Amanirenas and her son Prince Akinidad, to continue the fight.

When Amanirenas received the news of the impending attack, she had to think quickly and smart because Kush was much smaller than the Roman Empire. This meant that Queen Amanirenas had a smaller army. She planned to attack the Romans unannounced! Amanirenas led an army of 30,000 soldiers, armed with swords, bows and arrows, to fight the Romans in Egypt.

Fighting side by side her soldiers, Queen Amanirenas led the front of her army with her son by her side. Her attack was highly successful and Queen Amanirenas captured three major Roman cities. As a statement of their victory, her army went on to deface Augustus’ many statues of himself. Augustus was extremely angered by this. Rome retaliated by invading Kush. They destroyed its old capital and sold thousands into slavery. The Romans claimed victory for defeating Kush. But the war was not over yet…

Amanirenas counterattacked quickly and repeatedly, using some terrifying war tactics. A historical painting depicts her with two swords feeding captives to her pet lion. Another narrative claims that Kandake used war elephants on their enemies. The Kushite and Roman armies fought tirelessly with the queen who was strong in battle for three long years. During one of the fights, the queen was injured by a Roman soldier and blinded in one eye. After healing, the queen led her army to several more fights against the Romans.

After three years of battle, Romans gave up and agreed to sign a peace treaty which favoured the Kushites.Emperor Caesar Augustus agreed with the queen to take his army out of Egypt, give the Kushites back their land, withdraw their forts and cancel the taxes.

The Kingdom of Kush died a little over 400 years later, leaving ruins that were largely unstudied until the 1900s when excavators discovered the head of an Augustus statue. The head is the best preserved of its kind. It was kept underneath the foot of a Kushite ruler. To this day, Queen Amanirenas is said to be the bravest and most loyal ruler of the Kush kingdom.

The Nubian community of Kenya is composed of over 100,000 descendants of people originally from the territory of The Sudan. They were brought in as conscripts into the British colonial army. On demobilization, the colonial authorities refused to allow Nubians to return to Sudan. Instead, they were settled in Kibera in Nairobi, and other parts of Kenya, where they still live today. Ever since Kenya became independent from British rule in 1963, Nubians have been denied basic citizenship rights. Their status as British Protected Citizens combined with their Arab appearance and customs, meant the post-independence government viewed them as foreigners, a relic of the country’s colonial past, and have been made stateless. Although Nubians have settled in Kenya for over 100 years and are counted as one of the 44 communities in Kenya, their citizenship has not been assured to date.