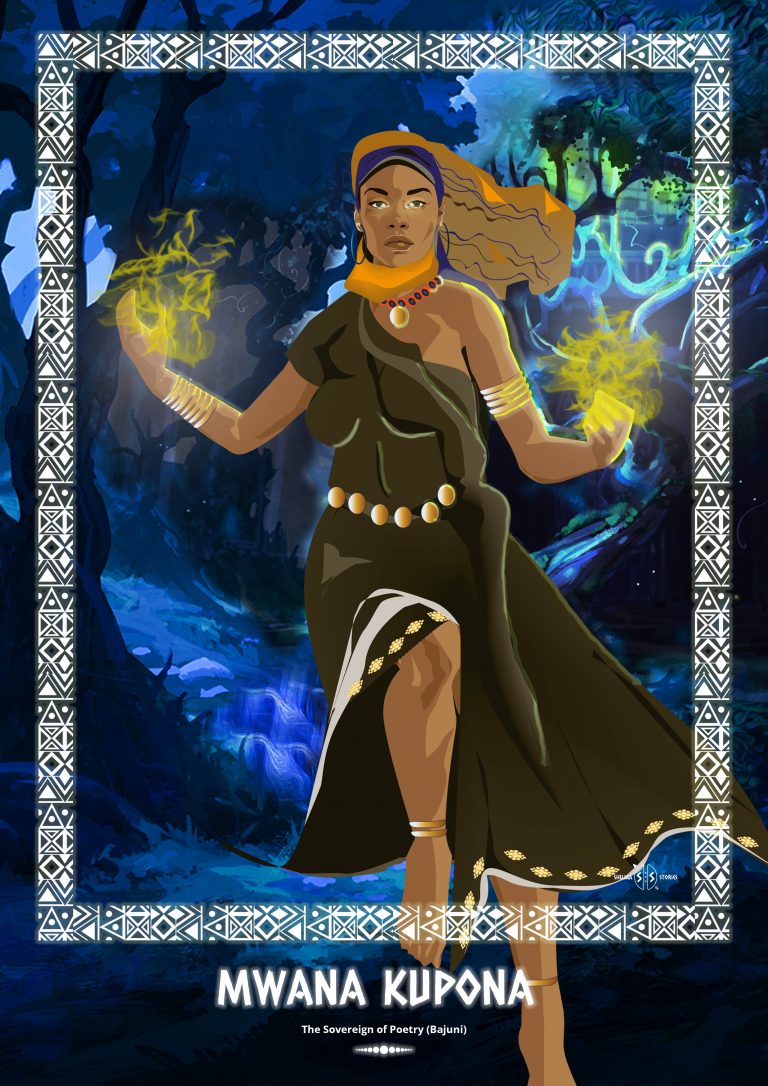 Mwana Kupona binti Msham was born in the 19th century, in the picturesque Pate Island off the Indian Ocean, close to the northern coast of Kenya. Pate Island was the centre of the Pate sultanate from the 13th to 19th Century. Surrounded by the Island’s Arabic and Swahili blend of exquisite architecture, fine arts, music and poetry, it was no surprise that Mwana Kupona grew up to become one of the most eminent and charming Swahili poetess of the 19th century.  She authored the poem, Utendi wa Mwana Kupona (“The Book of Mwana Kupona”), which is one of the most regarded works of early Swahili literature.

Little is known about the early life of this sovereign beauty but she probably grew up like any Bajuni child, following the beliefs, practices, and values that shape a person of substance.

What we do know is that Mwana Kupona was special and as she developed into an elegant young woman, her interest in poetry grew. She was like a princess in many ways; elegant, confident and boldly facing responsibilities, while letting her inner beauty bring light to everyone around her.

No sooner was she ready for marriage than she became a royal bride, the last wife of sheikh Bwana Mataka, ruler of Siu (or Siyu), with whom she had two children.

Her husband died in 1856 and two years later, she wrote her famous poem Utendi wa Mwana Kupona, dedicated to her 14-year-old daughter Mwana Heshima. The poem dates to about 1858 and is centered on the teachings and advice of Mwana Kupona to her daughter concerning marriage and wifely duties. Despite the seemingly secular subject, the book is prominently religious and even mystical, and it has been compared to the Biblical Book of Proverbs. A few lines of the poem are dedicated to the author herself.

The poem portrays a moving and warm story about a 19th century poetess, herself, Mwana Kupona, who composed an Utendi, an epic poem for her daughter to guide her through life. The story is told through activities and dialogue, serious as well as humorous, of the girl as she learns about love, life, religion and poetry through the verses of her mother’s poem.

This book is appropriate for teenagers and young adults; it is rich with detailed research about life in 19th century Lamu, and about the writing of Swahili poetry. An illustration on every page, musical scores of two old Tarab songs, and an epilogue that includes the complete text of the poem in the Lamu dialect of Swahili.

The Pate Sultanate from the Pate town, was a sultanate from at least the beginning of the 13th century until 1895. From 1858 on, it was the domain known as Wituland. Archeological evidence suggests Pate was a prominent location in local trade networks by the 10th century. The 18th century was known as the “Golden Age of Pate”. During this period, the town was at its height of powers, and also prospered in fine arts. Builders constructed some of the finest houses on the Swahili Coast, with extensive elaborate plaster works. Goldsmiths made intricate jewellery, fine cloths (including silks) were made by Pate’s weavers and carpenters produced fine wooden furniture. The use and production of the musical instrument known as Siwa was most famous. Two examples of Siwas still remain in the museum in Lamu.