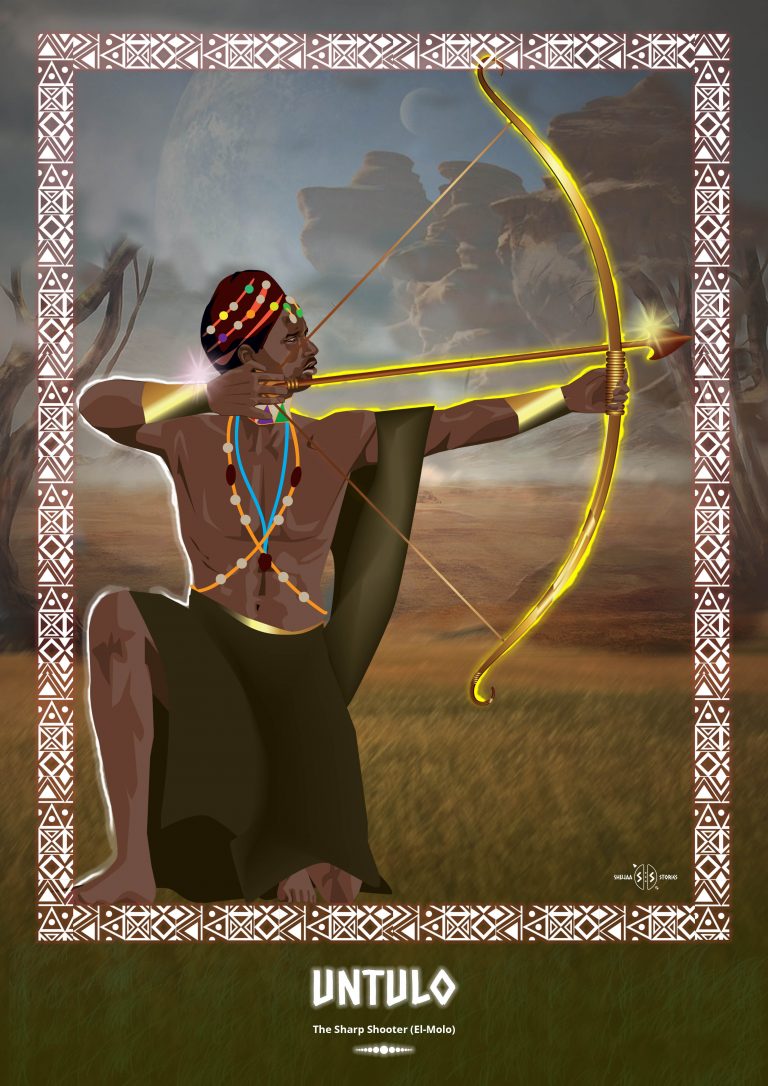 Many years ago, among the El-molo community, there lived a famous hero called Untulo. Untulo was the most skillful archer in the entire Island of Ilaote. The island had two grand villages, Garas and Palo. Untulo was from the Orgagaito clan in Palo village.

The El-molo people, particularly the men, practiced fishing. Every night the men went fishing in the lake surrounding the island and returned to the village at dawn. They enjoyed a happy life. They only had to be careful about crocodiles that lurked in the dark waters and their enemies from the neighbouring Borana community.

The fish the men took home was shared among women and children, the sick and the old. Fishermen who had been injured by crocodiles were the first to receive their share. The community practiced sharing for survival.

One evening, Untulo decided to visit his brother in Garas village. While approaching the village, he saw a troop of Borana men. Lo and behold! The men were creeping up the hill and to spy on the El-molo homestead. Garas men would be away the whole night, fishing. The Borana warriors planned to take advantage of the situation and approach the village unseen. Little did they know that Untulo was at the rear watching and following them.

Untulo stealthily crept along the bumps, trenches and bushes to get as close as possible to the enemies without being noticed. When he was close enough, he shot poisonous arrows at lightning speed. So shocked were the Borana warriors at the ferocious storm of Untulo’s arrows that those who survived fled for their lives in different directions. Untulo left his hiding place and marched into the field. Dead bodies lay around him. He pulled his arrows out of the bodies and put them back in his quivers.

Dawn came and the fishermen of Garas village walked home joyously with their huge catch of fish. But the mayhem they found frightened them and stopped them in their tracks. Borana corpses were scattered all over the place. The fishermen dropped the fish and ran towards their huts to see if their children and women had been harmed. Their expressions changed from shock to relief when they found them all peacefully asleep.

The fishermen knew at once that Untulo was the one who had saved the lives of their people. On that day, a banquet was held in honour of Untulo, the sharpshooter. To this day Untulo remains a famous hero among the El-molo community.

The El Molo are among Kenya’s smallest ethnic groups. They historically spoke the El Molo language, which is regarded as endangered by UNESCO. The El Molo live along Lake Turkana, the most saline of Africa’s large lakes. Lake Turkana has three National Parks, Sibiloi National Park, the South Island and the Central Island National Parks. They serve as a stopover for migrant waterfowl and are major breeding grounds for the Nile crocodile, hippopotamus and a variety of venomous snakes.
The Turkana Basin is well known for research studies which include exploration of the Koobi Fora deposits which has been found to be rich in mammalian, molluscan and other fossil remains. Exploration of this basin has contributed more to the understanding of paleo-environments than any other site on the continent.