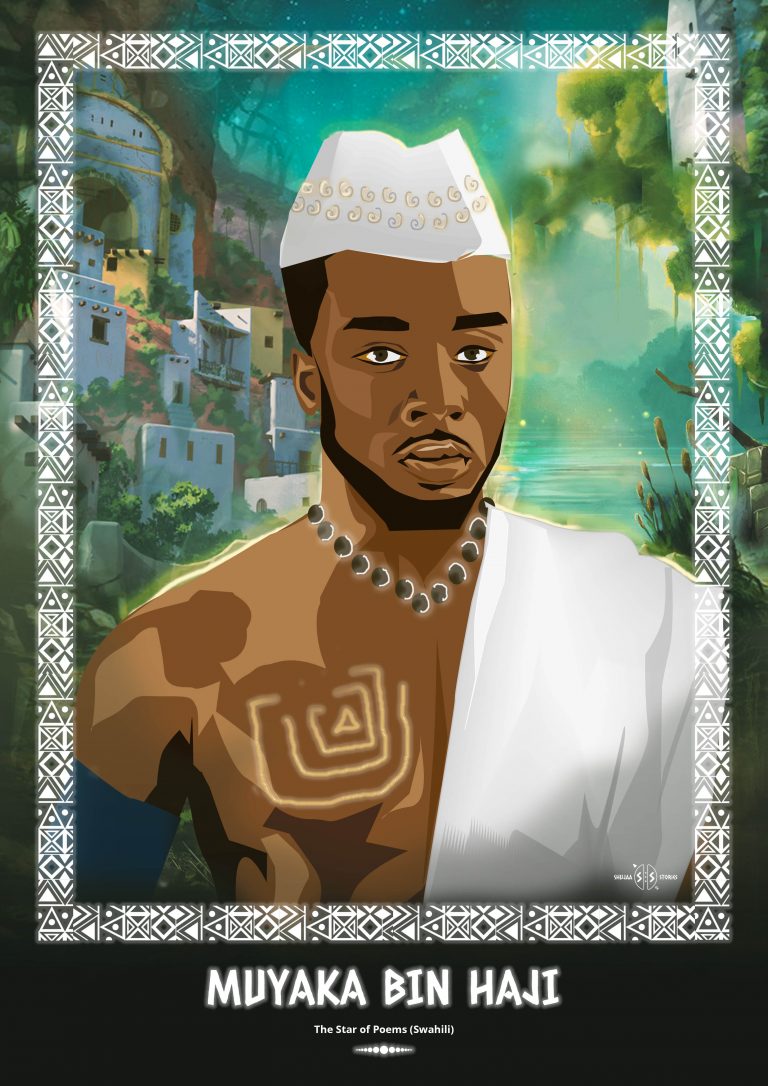 The Star of Poems (Swahili)

Can you guess the name of the first Swahili poet? In Kenya, the Swahili people are popular for their unmatched skill in poetry, dating centuries back. Sadly some of the authors of the earliest Swahili-language secular poems remain unknown. However, one stood out and is remembered by name: Muyaka bin Haji al-Ghassaniy, born in 1776, Mombasa.

His poetry dates from the first half of the nineteenth century, and was recorded in the late 1880s in Swahili-Arabic as well as in Roman transliteration.

His poetry describes, criticises and jokes about eventful times in the island of Mombasa, on the East African coast.

Muyaka used Kimvita in his poetry, a Swahili dialect commonly spoken in Mombasa. Although he was restricted by the rules of Mashairi poetry, he enjoyed playing with lyrics, as well as using archaic words and hidden meanings.

Mashairi is lyrical poetry. Like other genres of medieval poetry, Mashairi was characterised by strict thematic and stylistic canon. Any violation could lead to the exclusion of the deviant author from the ranks of poets.

Muyaka is recognised particularly as an outstanding composer of quatrains (the most popular Swahili verse form for both philosophical and topical themes). Quatrain is a piece of verse complete in four rhymed lines. The word is derived from the French quatre, meaning “four.” This form has always been popular for use in the composition of epigrams and may be considered as a modification of the Greek or Latin epigram.

Muyaka experimented with different poetry styles. He also worked on topics that ranged from political satire to love poems, and domestic life (it is said that his shrewish second wife was a source of poetic inspiration for him).

Muyaka’s concern with the early 19th-century political situation is shown in poems that encourage the Mazrui rulers of the fort at Mombasa to oppose the over lordship of the sultan of Muscat, then rulers of the settlements along the Indian Ocean coast. The preface to his collected poems, “Diwani ya Muyaka”, gives insight into his dual role as a commentator on his times and a voice of contemporary opinion.

One of the Muyaka poetic epic “Bao Naligwa” is about a traditional board game known as Bao, common in East African communities.

Muyaka bin Haji al-Ghassaniy died in 1840 and is not only remembered for his own poetry but also for the inspiration he has had on contemporary nationalist epics.

The East Africa coast supports rich wildlife populations, some which are found nowhere else in the world. In terms of biodiversity, coastal forests in Kenya such as Shimba Hills, Lower Tana River forests, Witu Forest Reserve, Arabuko- Sokoke Forest; Diani Forest and Kaya Ribe, host all globally threatened species occurring along the coastal strip. The region also has a rich cultural diversity. There are over 1,200 documented cultural and historical sites and monuments at the Coast under the National Museums of Kenya.