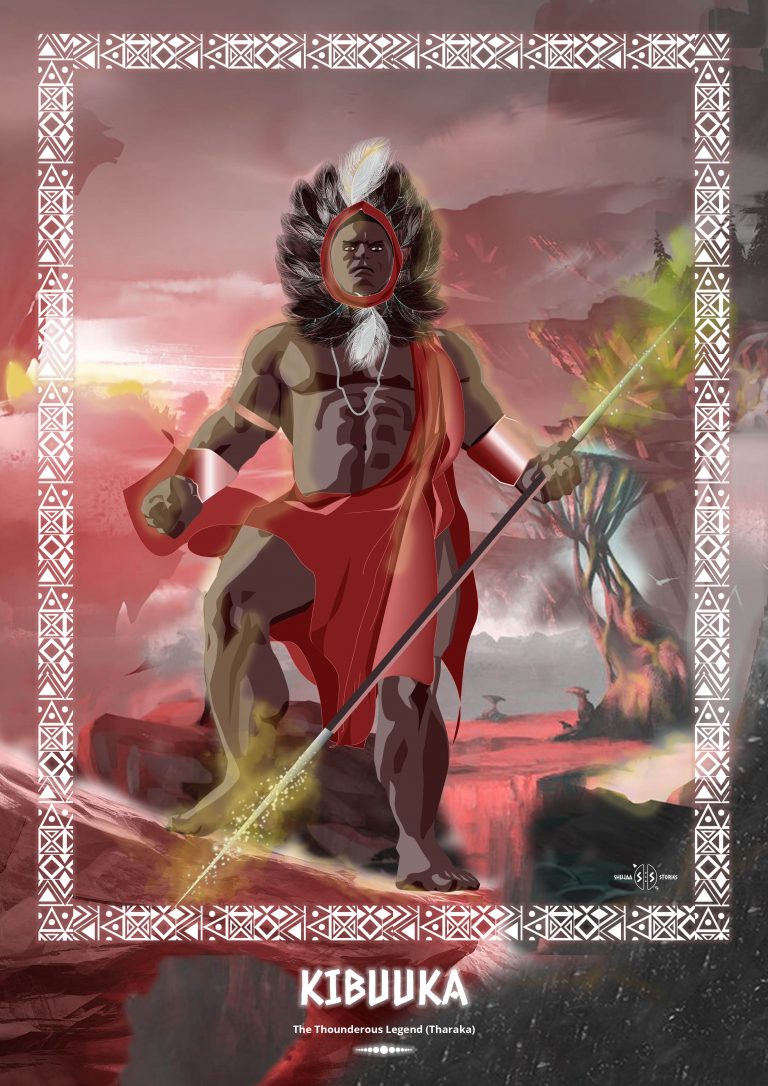 In the oral tradition of the Atharaka, there lived a spiritual leader, medicine man, diviner and rain maker known as Kibuuka. He was the son of Karikundi and Ciakinene, a married but barren couple. Kibuuka was a miracle baby!

Before Kibuuka was born, Karikundi and Ciakinene were very devastated because they could not have a child. This truly broke their heart and they were determined to seek solutions.

One day they visited a seer to seek guidance on how to get a child. The seer told them they will never get a child. However, the seer informed them that one day it would rain heavily, with thunder and lightning. During the downpour, they’d hear a child crying, a boy rumbling like thunder during the storm, in their cattle kraal. The couple was instructed to go and take him home as their son.

It so happened, and Karikundi and Ciakenene took the boy home to their house. Whenever they were asked for the name of their son, they answered Kibũka meaning the thunderous cry of a baby.

Kibũka grew up to be a strong boy.

When the period of initiation, Kumerua (a teenage rite of passage) came, he disappeared and did not undergo the process! He later reappeared later and surprisingly, he was already initiated. He became a great warrior and administered Tharaka warriors with charms during wars to protect them from enemies in combat.  He also led Tharaka in many successful wars against the Akamba, Mbeere, Igembe among others.

Later he married and bore many sons. His eldest son led the Tharaka battalion in every war. In several incidences, the son got killed in wars but resurrected by the power of charms embossed in his abdomen by his father.

A time came when the enemy spies and a Tharaka traitor revealed the charm in the son’s abdomen. They killed him and gouged out the charm from the abdomen. He died completely.

The charm was a magic horn, “rugoci”.

Kibũka was so furious about the murder of his son. He cursed the Atharaka, pronounced that they will never have a leader. He then emigrated from his residence, a shrine which is said to be near Kibũka Primary School in Tunyai Location of Tharaka South District.

The route Kibuuka followed as he emigrated is alleged to have turned into a seasonal river (the current Kathambangiri River in Tunyai). He passed by Kijege Hill, at a place called Kaunguni, meaning ‘at the Pot’. It is said he left one of his cooking pots at Kaunguni, which gave the place that name. His footprints are also said to be visible on a rock in Kijege to this day.

From Kijege, Kibuuka is said to have disappeared into River Tana, at the confluence with River Kathita. The places he lived and paused at are all shrines, called in Kitharaka ‘Iiri’.

The narrative of Kibũka would take very many days to tell. It has therefore been broken down into series.

The actions of this great man, who actually walked the land as a leader of the Atharaka people, captivate both the young and old.

To this day, people come into contact with his stories and visit sites associated with Kibũka. These sites include the Kibũka falls which supplies energy to High Grand Falls Hydroelectric Power Station across Tana River, Kibũka the area and Kibũka’s homestead. It elicits the same reverence that was accorded him many years ago.