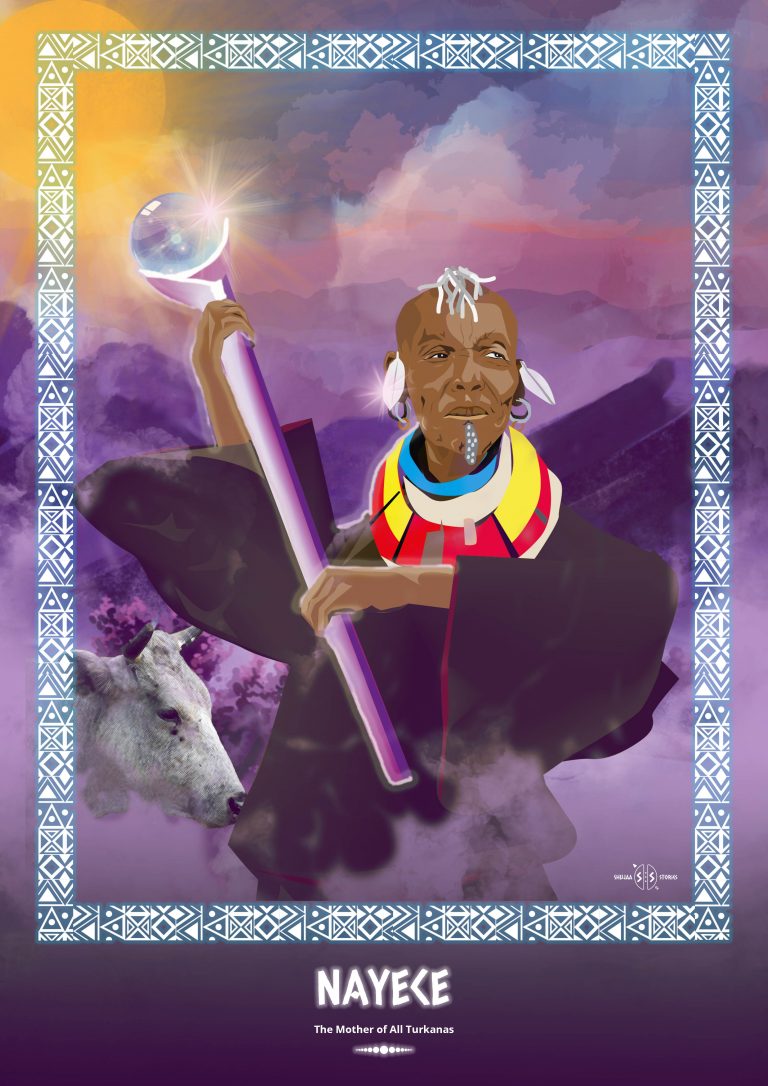 The Mother of All Turkana

The story of Nayece, the legendary mother of all Turkana, begins many years ago when a group of eight young men lost a bull. The bull of a specific shade of grey or engiro,  was their source of wealth and they could not afford to lose it. The eight young men set out on a journey to find the lost bull.

They passed through valleys and hills, fought with wild animals on the way, passed through communities who saw them as possible spies sent by their enemies and felt threatened. They endured climate changes from one area to another, from scorching sun to heavy rainfall.

They travelled eastwards from the country of Jie in Karamoja, tracking the lost bull of a specific shade of grey, engiro.

Descending to the escarpment which now serves as the border between Uganda and Kenya, the young men arrived at the headwaters of the Tarash River. They were struck by the beauty of this foreign landscape, where the sand is light, the trees are few and the wind blows freely. They could see where the sun touched the ground and they fell in love with the sun set.

There in this foreign land on a hill called Moru Anayece which means ‘Nayece’s Mountain’, they found the bull of a specific shade of grey, engiro, living with Nayece. Nayece, an old woman, had also come from Karamoja to gather wild fruits. She led the young warriors into a lush and verdant valley, unoccupied by people. The valley was rich in wild berries which even today are an important part of the Turkana diet. She welcomed the young men by showing them around the area, gave the men fire and taught them how to cook.

Impressed with the area, the young men return to the country of the Jie, to collect additional young men and girls, and to drive herds of livestock back to the Tarash. They decided to remain in the new area permanently, and thus became the Turkana. Nayece divided the men into the territorial sections which are the basis of Turkana society today. She became the mother-heroine of the Turkana. Ever since, the Turkana and the Jie have been allies.

Lake Turkana, is located in Turkana County in the Kenyan Rift Valley, in northern Kenya, bordering Ethiopia. Lake Turkana is the world’s largest permanent desert lake and the world’s largest alkaline lake. By volume it is the world’s fourth-largest Salt Lake. The Nile crocodiles are found in great abundance on the flats. The rocky shores are home to scorpions and carpet vipers. The lake is rich in fish and fishing is very important to the local economy. Lake Turkana has three National parks; Sibiloi National Park which lies on the lake’s eastern shore, Central Island National Park and South Island National Park  which lie in the lake. Both are known for their Nile crocodiles. They are now listed as a UNESCO World Heritage Site.