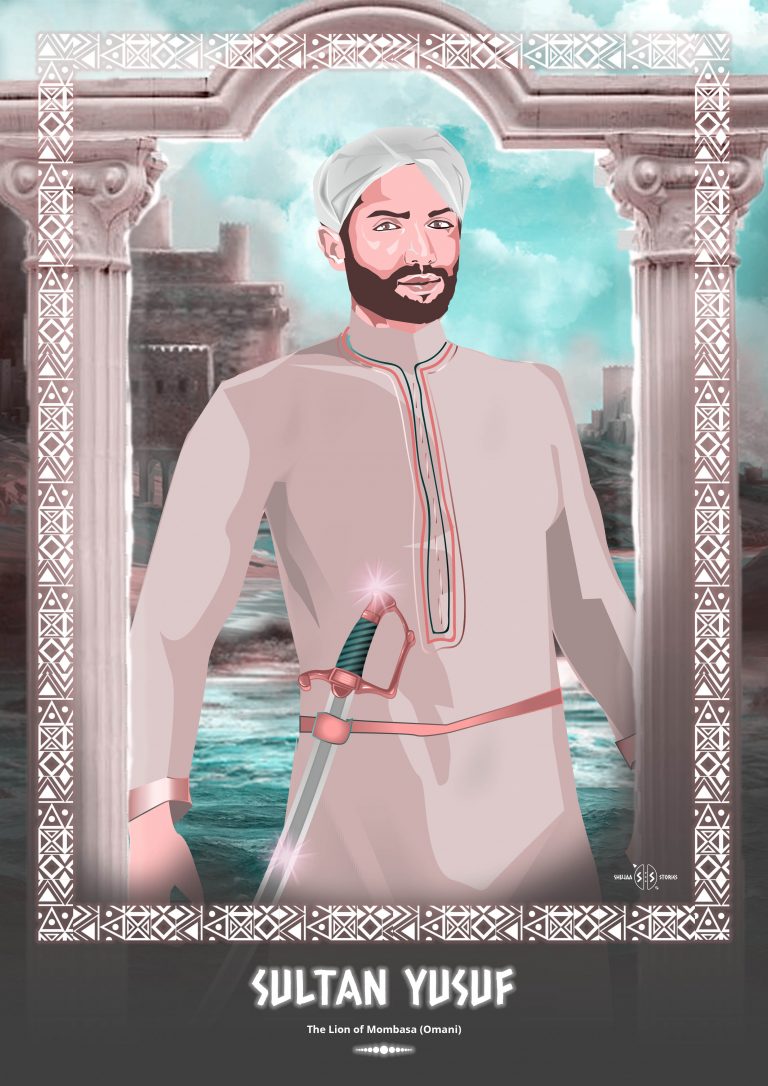 The Lion of Mombasa (Kenyan Arab)

A man may be uprooted from his homeland and taken to a faraway land, but the roots of his people will always find him. The spirit of his ancestors will forever guide him. That is what happened to Sultan Yusuf.

Yusuf was born in 1608 in Mombasa. He was the son of Sultan Hassan, a former Mombasa leader.

In 1615, the governor of Mombasa sent Yusuf to study in a Catholic school in Goa, India. While in Goa he was christened and became a Catholic. In early 1630, after 15 years of studying in several catholic schools and acquiring a Portuguese education in Goa, Yusuf returned to Mombasa. The Portuguese were satisfied that had become ‘one of them’, an ally, and he was installed as the Sultan of Mombasa by the Portuguese amid pomp and fanfare in August of the same year. The Portuguese were confident that with Yusuf whom they considered their son at the helm, the warring city state of Mombasa would be pacified and would not rise up again to challenge Portguese rule.

However, Yusuf had learned about the oppression the Portuguese meted on his people and he abhorred and disliked them. He scorned and hated them despite his christening.

In 1631, Yusuf was discovered praying at his father’s tomb, an act considered an abomination by the Portuguese. He also married many wives, who were daughters of the most influential families in Mombasa at that time. This put him in conflict with the Portuguese. In the same year, 1631, the Portuguese appointed the sadistic Pedro Leytan de Gamboa as the commander of their forces. He was based at Fort Jesus in Mombasa.

With the support of the Imam of Oman, Yusuf  secretly planned to expel and remove the Portuguese from all city states on the East Africa coast. A year later, Yusuf spearheaded the rebellion that killed many Portuguese officials, soldiers and commanders. In the end, he even killed the governor and then defeated and expelled the Portuguese from Mombasa. This feat earned him the title, “Sultan Yusuf Lion of Mombasa”.

History gives us the tools to analyze and understand problems of the past. It also allows us to see patterns that may not be clear in the present and thus providing a crucial perspective for understanding and maybe even finding solutions for current and future problems. The history of the Omani Empire is taught in Kenyan schools. At its peak in the 19th century, Omani influence or control extended across the Strait of Hormuz to modern-day Iran and Pakistan and as far south as Cape Delgad. The Omani Empire was a maritime empire, competing with Portugal and Britain for influence in the Persian Gulf, and the Indian Ocean.  After the death of Said bin Sultan in 1856 the empire was divided into two sultanates, an African section (Sultanate of Zanzibar) ruled by Majid bin Said and an Asian section Sultanate of Muscat and Oman ruled by Thuwaini bin Said.