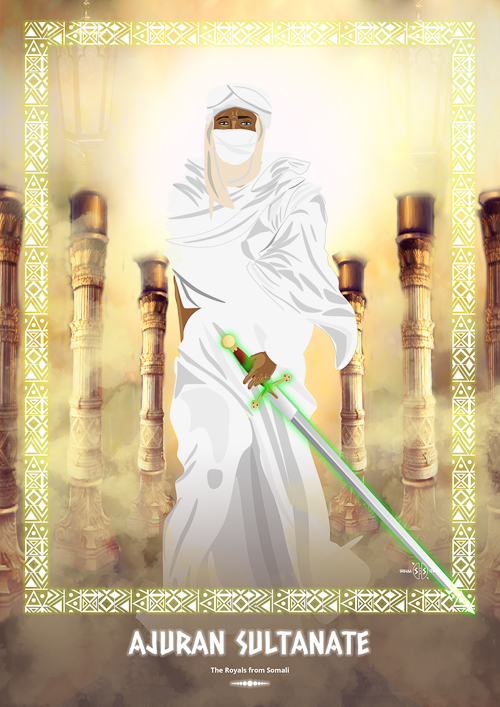 In the midst of the vast Somali expanse in the 13th century, a great empire dwelt upon the land.

Canals crisscrossed the Shebelle and the Juba rivers and the land was lush with crops. They were a marvel of hydraulic engineering like the land of the Pharaoh’s was before them. For miles around, this great kingdom was the best, and the only empire in Africa that had bent rivers to its will. Complementing its canals, were wells and cisterns that are still in use even to this day. With a centralized system of government, the Sultans at the helm and a strong military, not even the Oromo from the west and the Portuguese from the east could measure up to its might. This, was the Ajuran Dynasty

At the peak of the European age of exploration, the European superpower, Portugal was perhaps the most determined to test the strength of the Ajurans. Their conquest begun with the city-states of Mombasa, Malindi, Kilwa, Lamu and Pate. Some they plundered others they torched. The overzealous Tristao da Cunha went as far as daring the Ajuran Empire itself, in the battle of Barawa but the resistance was too stiff and the defenses too strong. The Somalis from the Ajuran Empire fought fiercely and defeated the Portuguese leaving injured Tristao nursing injuries in the Socotra islands.

The Portuguese were not ones to take defeat easily. Tristao wanted to mount another attack on Mogadishu, the Ajuran capital and richest city in Africa. However, the Portuguese thought it a foolish idea to attack the Ajuran stronghold and advised against it. With that, the Tristao backed down and left the Ajurans in peace.

That was not the end of the Portuguese attempts on the Ajurans.  Joao de Sepuvelda led a Portuguese battalion and tried to get into Mogadishu via sea in what was the battle of Benadir. The Ajuran Navy too defeated him before he even reached the shores of Mogadishu.

By the 1580’s some of the coastal cities were already under Portuguese oppression. The Ajurans, a kind hearted people as they were, sympathized with the Swahili and Arabs living in those cities and called for help from the Turkish for a joint force against the Portuguese. Mir Ali Bey responded with his fleet and drove the Portuguese out of Pate, Mombasa and Kilwa. The Portuguese also drew reinforcements from India and forced the Ajuran’s into defense. They avoided Mogadishu nonetheless, even after managing to retake the cities under their control. In the end, the Portuguese were overpowered for good.In the 17th century, the expanding Oromo nation of Ethiopia reached the Southern Somali coast. At the same time, the Ajuran Empire was at the height of its power. The Garen rulers of the Ajuran Empire carried out military conquests known as Gaal Madow Wars against the Oromo warriors, converting whoever was captured into Islam. The defeated Oromo had no option but to migrate elsewhere.

When the lands of the Shebelle and Juba rivers were lush with crops, water flowed from Mount Kenya, feeding the rivers flowing north and east. There were trees growing all over the landscape. Today the drylands do not produce as much, because water is used for farming and livestock before it reaches the drylands. Trees have been cut for charcoal. The use of water has to be regulated to meet the needs of both upstream and downstream users.