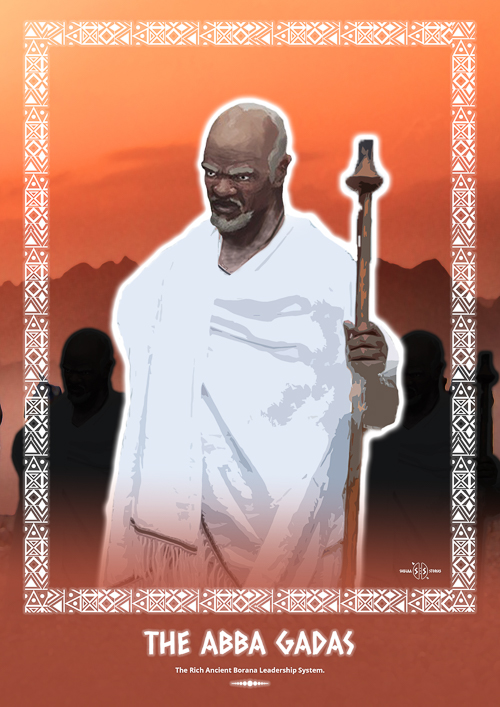 Across the dusty plains, under the shade of the acacia, six old men regard one another. A few of them are pulling at their scraggly white and ochre beards while nodding in agreement. This is the Adula council; they have come to debate as to who should manage the wells. Married Borana men look in their direction them from afar, as they water the camels. After a few minutes, the head of the council arrives, the Abba Gada or ‘father of Gada’ as he was called in the Borana tongue. Old and wise as his years, he trudges along, stick in hand. His eyes still shine with the rigors of his youth. He takes a seat at one end of the council as he has done at the beginning of his rule, eight years in total. The council men bow in reverence. Councils like these have sat down under similar circumstances in the gentle late afternoon sun, for the last five hundred years. For five hundred years, the Borana have religiously followed this system of ruling themselves because it has kept them together, in unity.

Seldom did division occur even among the council men because they were of the same age set like the ones who ruled before them. They were the Gada class or the Warra Bora. Some of these old men may have also sat in the Borana Assembly, the ‘Salgan ya’a Borana. The assembly had the president, two vice presidents and six other very important officials who run the Borana administration. These were the Abbaa Chaffa, the chair of the assembly, Abbaa Dubbi, the speaker, Abbaa Seera, ,the Memorizer of laws Abbaa Alanga the judge, Abbaa Duula, the army commander, Abbaa sa’a  in charge of the economy. The president was called the Abba boku. Like modern parliaments today this Borana parliament would summon sittings to make, repel or ensure that the laws were being followed. The end of a discussion to issues was accepted without question and the Abba Muriti, the father of resolution was there to make sure of that. .Married men could also participate or send representatives to the assembly

Below this assembly was the Kenyan MCA equivalent, the councillors, Hayyus who made the less weighty decisions. They ensured that the laws made in the higher levels of authority reached the people. The people would hold elections to elect a new crop of leaders every eight years according to tradition, Indeed, democracy existed in Africa long before the white man ever set foot on the African continent and strong, age old dynasties are not the preserve of Europe and Asia.

The decisions made by the traditional councils also affected the use of natural resources. For example, certain areas, such as forests, were set aside as drought refuge. Herds of cattle or camels were not allowed to go there unless there was an extremely severe drought. Today we seem to have forgotten these important rules, and cattle invade and damage forests every dry season. There may be no refuge left for them in severe droughts.