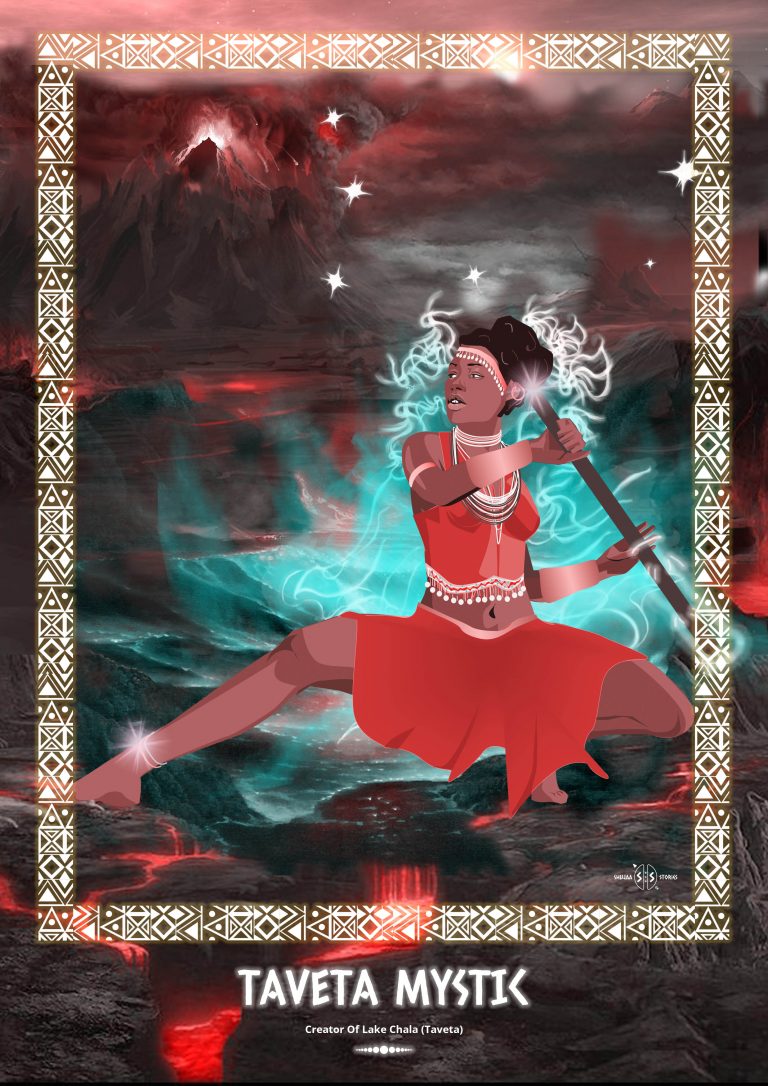 A long time ago, in the ancient land of Taveta, on the border of Kenya and Tanzania, there lived two clans. The story goes that one day a mysterious woman appeared and asked for a place to sleep. But the first clan she approached were in the middle of celebrating a bumper harvest and were having their annual sorghum beer drinking festival. So, the clan said to her “go away, you dirty miserable woman”.

Sad and disappointed by this treatment, the woman went to the village of the Mnene clan and made the same request. The Mnene clan welcomed her with delicious food, and gave her a warm place to sleep.

The following day, the mysterious woman woke up happy but, warned the Mnene clan about the curse and calamity she was going to bring upon the clan who had chased her  away. She told them about a similar incident that happened at a place called Simbi Nyaima where a lady called Anyango cursed the villagers for mistreating her. Later, Simbi village sank after a deluge of rain and formed what is now called Lake Simbi Nyaima in Kendu Bay.

The mysterious woman then disappeared. That night, the ground  in Taveta started to shake, and fear gripped the villagers as they did not understand what was going on. The tremors got stronger and stronger, houses collapsed, animals began to run helter-skelter, dogs howled with fear. Suddenly there was a loud bang! A huge plume of black smoke shot up from the ground and covered the sky! The ground began to sink. The villagers cried out for help but to no avail. The ground sunk and became an enormous crater.  Water welled up and the  villagers disappeared. The curse of the mysterious woman was fulfilled. And this is the legend of how  Lake Chala came into being.

Legend has it that at night, the villagers who sunk into the lake can be heard  beating drums and crying out to be rescued! It is also believed that the whirlpools that form on Lake Chala during the day are the unsettled spirits of the villagers who sunk into the lake. And, their descendants are  warned never to swim in the lake. Whenever they do they drown!

Lake Chala in Taveta is a deep four-square kilometer crater lake straddling the border of Kenya and Tanzania. This beautiful crater lake is located in North Taveta. It is a caldera lake, therefore it is very deep, accounting for its beautiful turquoise blue-green appearance. A passerby may not know that it exists because it’s completely hidden from view, making it all the more mysterious and exciting to visit. The lake is fed by ground-water from Mt. Kilimanjaro. The lake has a unique ecosystem with some endemic species like Lake Chala tilapia, a critically endangered species, found only in this lake. Nile Crocodile (Crocodylus Niloticus), were introduced in the lake in the early 1900’s.