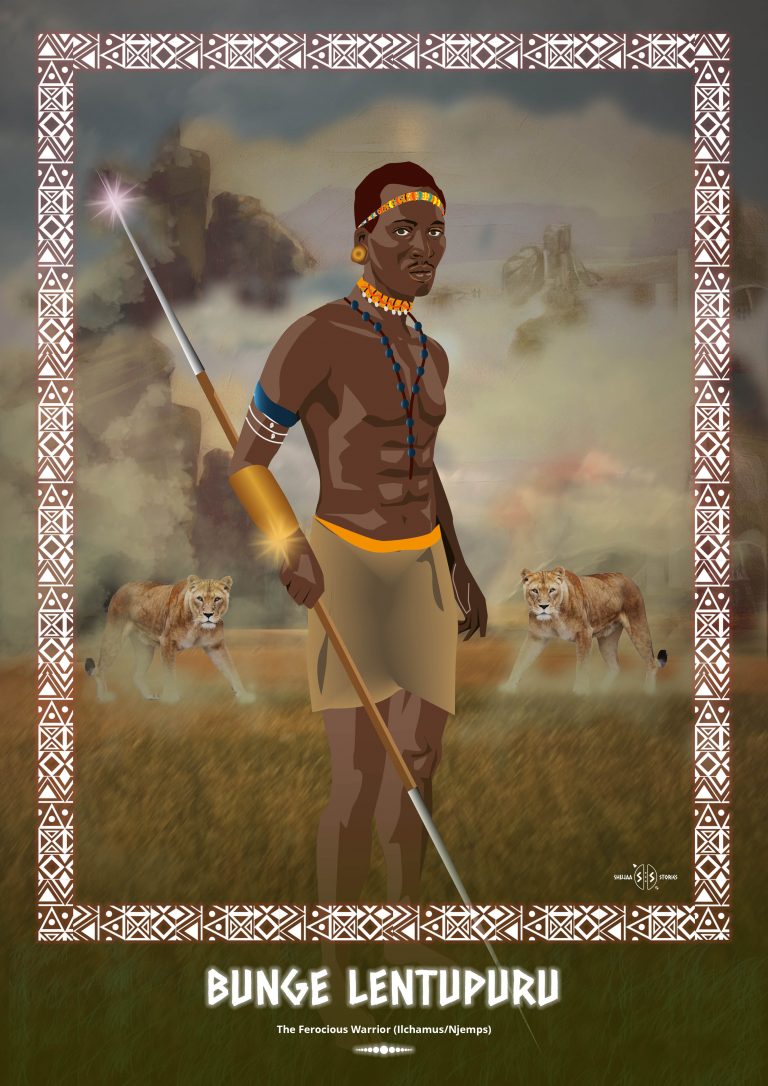 Among the Ilchamus of Mkutani in Baringo County, there lived a man called Bunge Lentupuru who was  believed to have been born in late the 1890s.

Bunge Lentupuru grew to become a strong child and among his brothers, he was favoured by his father. By the age of seven, Lentupuru had learned and acquired the skill to herd his father’s cattle. Besides herding, Lentupuru together with his age-mates, learnt to hunt, fish and ward off ferocious wild animals which were a menace to the livestock in his village.

Lentupuru became a Moran leader and learnt how to prepare for war and how to protect his community under the spiritual direction of the Laibon (medicine man).

But to become a Moran, he had to endure the moranship training which consisted of living in isolation in the bush, learning Ilchamus customs and developing strength, courage, and endurance — important traits for warriors throughout the world. It was after this training that he graduated to the moran age-set, referred to as lbaricho.

One day, while grazing his father’s livestock in a field far from Kiserian, he encountered a pack of five Ngetuny (lions). The lions attacked and snatched his father’s favorite bull at a lightning speed.  Screaming for help from the morans who were grazing nearby, Bunge Lentupuru attacked the five lions with his Ngotit (spear). He speared the lioness who was leading the pride in the belly, it died instantly. This provoked the most ferocious lioness in the pride to jump towards him. Without missing a beat, he speared this attacking lioness right through the throat and it dropped dead. The remaining members of the pride scampered for their lives, and let go of his father’s bull.

This heroic act made Lentupuru a celebrated hero. Several songs were composed to celebrate and commemorate his spearing of two lionesses. He received presents from his ageset, the lbaricho. The community celebrated him and old men blessed him as a hero.

Lentupuru later married two wives who bore him seven children. He became a respected leader and statesman. In 1975, in present day Kiserian location Mkutani ward, Baringo County, the Orkoik of council elders recognised the bravery of Bunge Lentupuru and declared him an Ilchamus Laibon and Orkoiyot (Chief leader).

The Ilchamus live in Baringo County whose most notable feature is Lake Baringo. Baringo County has unique landscapes and prolific birdlife making the lake a fascinating place for geologists and nature lovers’ alike. Fishing is an important socio-economic activity for the communities in the region. The lake boasts of seven fish species including an endemic Nile Tilapia.
Lake Baringo is one of only two freshwater Rift Valley lakes in Kenya, the other one is Lake Naivasha. Lake Baringo is fed by a number of rivers, but has no visible outlet. It is assumed that the water seeps away into the bedrock. The area is a popular destination for both local and international tourists.