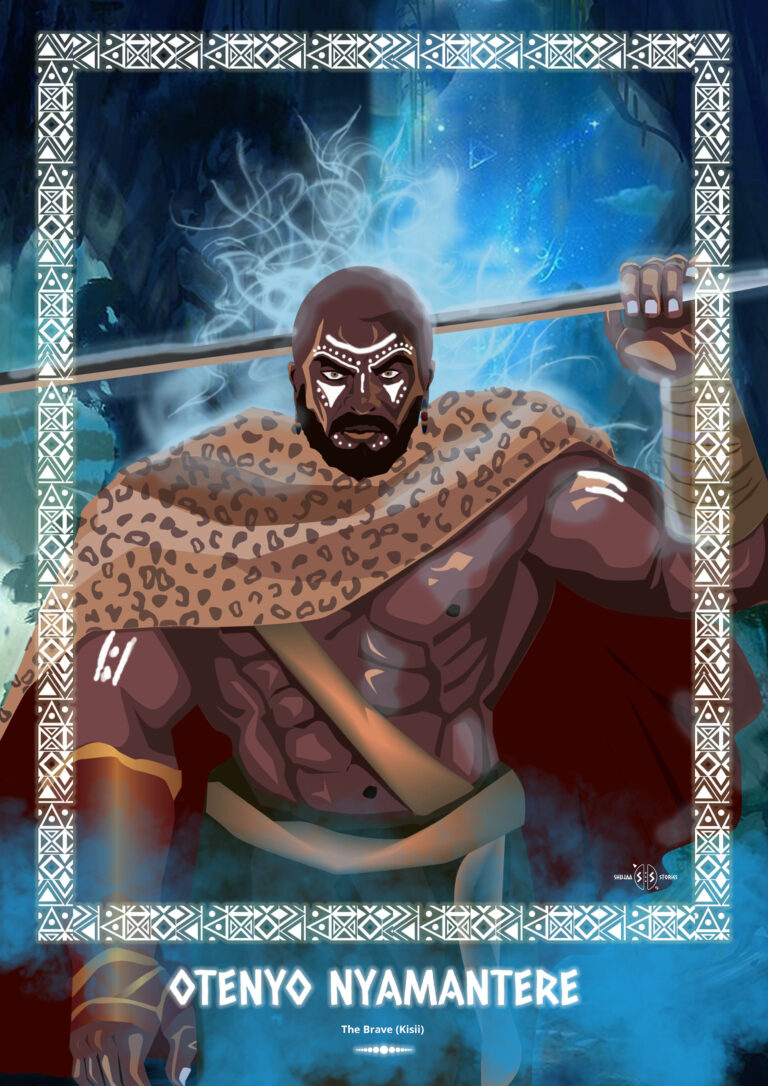 Otenyo was an Abagusii warrior who led the resistance against the British invasion of Kisii. His full name was Otenyo Nyamantere. He was adopted and brought up by his aunt, Moraa Ng’iti, another prominent Abagusii personality.

In 1905, the King African Rifles that came to crush the Abagusii rebellion, killed many of the Abagusii, burned homesteads, seized livestock and destroyed crops. They also shot and killed women and children who showed resistance. The Briton responsible for the killings was a ruthless man called Milton who, on behalf of the colonial government, was to punish the Abagusii for having raided their neighbouring communities and stealing from them. Geoffrey Northcote was another who was hated so much because of the ruthless killings of their people.

One time, Otenyo’s aunt, Moraa advised that he confront the British and fight them. Otenyo gathered the finest of the Abagusii warriors and with his aunt’s blessings went after the British. Armed with only poisoned arrows and spears, he and his warriors lay an ambush in the path of the British who had seized another herd of livestock and were driving them away. It so happened that Northcote was also leading that expedition. During the attack, Otenyo speared Northcote on the right shoulder before he drew his gun and defended himself. Supposing him to be dead, Otenyo grinned in triumph before disappearing into the bushes. Despite their inferior weapons, the Abagusii warriors were victorious over the British but not without a few casualties of their own. This attack happened in the present day Manga in Kitutu region.

The Abagusii celebrated Otenyo with song and dance. He had become some sort of super hero to them for having killed the white colonial administrator who had tormented them in the past. The Abagusii warriors meanwhile were so motivated by Otenyo’s bravery and started carrying out reckless, frequent raids. Unknown to them, Northcote had not only just survived the spearing but had sent a message to Kisumu for reinforcements. The reinforcements arrived in Kisii three days later and showed even more brutality on the Abagusii than before. More people were shot and killed to draw Otenyo from hiding so that he could be captured. In the end, Moraa was forced by the colonial government to hand over her nephew in exchange for the end of bloodshed. She and the Abagusii elders gave him up.

Otenyo was executed by a firing squad, beheaded and hung on a bridge as a warning to the rest against rebellion. His head was transported to London as proof that he was dead and put in a British museum. Like that of a martyr, Otenyo’s legend, grew larger than life with the years.

Brave warriors of the past defended their land against the invaders. Today, we need to protect our lands against other forces: logging, charcoal making, soil erosion, drought and flood. If we don’t stop these threats they will control us. Where forests have been cleared, soil is washed away. Where wetlands have been drained, floods fill our homesteads. Let’s protect our forests, wetlands, hilltops and riverbanks!