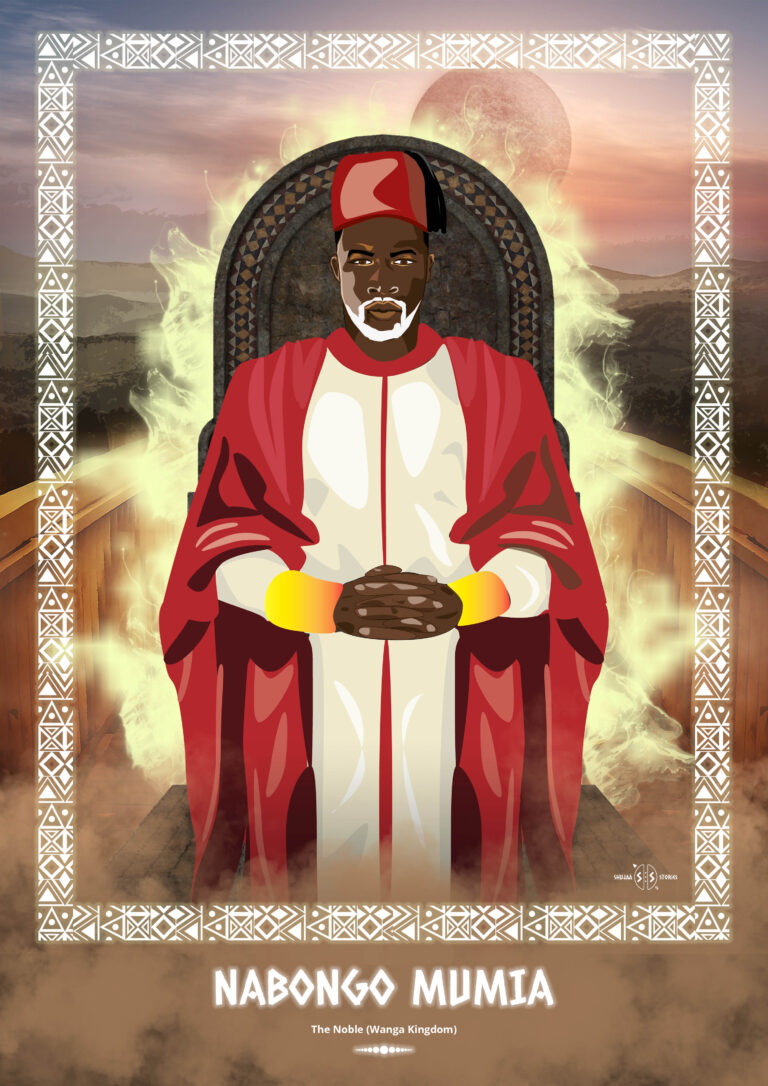 Mumia was a prince born in the royal family of Nabongo Shiundu and his mother Wamanya. Nabongo means King.

Five of Mumia’s elder siblings had passed away when they were still little. Believing that the deaths were due to evil spirits, little Mumia was placed by the roadside as rubbish (makokha) according to customs so that the evil spirits would not harm him. He was picked up by someone called Abamia (a.k.a mumia in singular or omumia) and returned to his parents. From then on he became known as Makokha Mumia.

Mumia grew up an ordinary child, looking after cattle, wrestling and exchanging stories and proverbs. He hunted animals, and even killed a lion and a leopard when he was a little over eighteen years old. He was a handsome, slender, tall young man with a deep voice but he was also shy and timid to strangers leading his father to decide that the boy was weak and feminine so would not be groomed to be king.

But little did Shiundu know that by means of a crafty plan by Mumia’s mother, the young man would succeed him as king. By tradition, Luta, his elder brother, was the heir to the throne. However, Wamanya tricked her husband into believing that Luta wanted to overthrow him. Shiundu disowned Luta and denied him any rights to the throne and royal property.

Mumia was appointed successor upon his father’s death. He was crowned as Nabongo and dressed in the royal regalia. He became the 17th Nabongo of the Abawanga kingdom automatically becoming the custodian of the Wanga customs and traditions, safeguarding the royal regalia consisting of the copper bracelets sacred spears (likutusi and lishimbishira). According to legend, the copper bracelets held magical powers and could cause the death of a person if the Nabongo so wished by hitting them together and calling the name of the person. The sacred spears which were described as being of ancient origin could cause conflict if a man took them outside and pointed them in different directions. They were therefore closely guarded and only a few selected members of the royal family could hold them.

Nabongo Mumia was considered a very popular living legend and a great king by his subjects because his style of ruling was different from that of those before him. As King in his thirties, he was very responsible and efficient, even listening to the common people which had never been done before. He was generous, pleasant, very jovial and fair in all his dealings.

During the colonial administration, the colonial administrators were in awe of his power and influence. Mumia collaborated with them in whatever he felt was useful to his people and the colonial administrators recognised him as a paramount chief. This however, was the beginning of the decline of Nabongo Mumia’s influence in later years until his death. In time the British felt threatened by his kingship. They stripped him of his powers by manipulating him and then forcefully and unknown to Mumia, retiring him. They even went as far as replacing Mumia’s successor, his son, with his nephew Osundwa who was easy to control. This greatly reduced Abawanga’s power. Even the capital was moved to Kakamega then known as Fort Maxted from Mumias. Nabongo Mumia died on April 24th, 1949 and was buried in a large ceremony attended by people from far and wide.

Mumias is named after Nabongo Mumia – Mumia’s, now Mumias. Not far from Mumias is the Kakamega Forest, Kenya’s only rainforest. The forest is the last remnant in Kenya of the great Congo basin rainforest that stretches across Africa. Many of the birds, plants and butterflies in the forest are not found elsewhere in Kenya. Kakamega Forest – a Key Biodiversity Area – is a precious treasure for the people of western Kenya, the nation and the world.