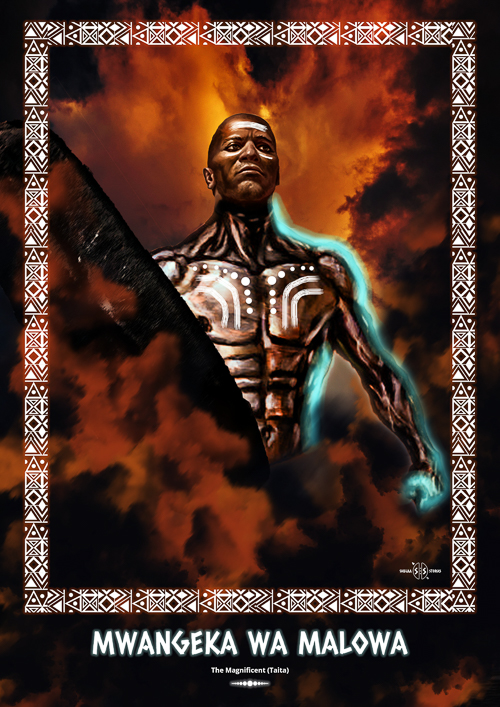 Taita Taveta, land of majestic hills that hug the bosom of the sky, sometimes shrouded in mist and clouds. This land, rocky and its oil red, was home to the Mwangeka wa Malowa, hero, soldier and Chief of the Taita people.

As a leader, he championed his people in opposing colonial rule in the 19th century. At his command was a Taita army, which watched over all insecurity prone areas on the long distance trade routes from Mombasa through Taru, Voi, Mwatate, Taveta to Kilimanjaro.

Since he was in control of this route, Mwangeka often levied taxes on coastal traders for them to pass through these routes. Some traders also signed treaties, mtero with Mwangeka to ensure their well-being while passing through the Mombasa-Kilimanjaro route. However, some of the traders did not take this kindly and viewed it as disrespectful to the Sultan.

At the time, security in Taita Taveta was good. The British on the other hand had other ideas-invasion of Kenya, under the Imperial British East Africa Company. The occupation of the Taita territories in particular excited the coastal traders and the Sultan so much that they were willing to support the British. In 1892, a British Captain, Nelson led a joint battalion of British soldiers and soldiers allied to the Sultan into Taita Taveta to destroy Mwangeka’s influence. As with other military incursions, the British soldiers did what they were infamous for, plundering, torture and destructions. Then they faced down with Mwangeka’s soldiers at Mwashoti where they met fierce resistance. It took the British one month to get to the Taita hills because the terrain favoured Mwangeka’s soldiers. Unfortunately, even with their superior weapons, the British were sent scampering down the hills in retreat. They were no match for the shrewd military tactics of Mwangeka’s soldiers.

The fall of Mwangeka as it turns out, was from betrayal by one of his own tribesmen. Mbogholi wa Samaghembe leaked Mwangeka’s military tactics to the intelligence wing of the British Army after being bribed. With that information, Captain Nelson marched his soldiers to Mlughi village where he torched houses and hurt innocent villagers. A certain ally of Mwangeka, Isanga Iwishi sent him a message that the British were oppressing his people in Bura and Mwashoti. Even after being forewarned of his death by the walaghui, fortunetellers, Mwangeka was determined to save his people. Mwangeka led his soldiers to Mwashoti and Mlughi and put up a spirited fight but the resistance was fierce.

Reinforcements did not come in good time and in the ensuing retreat, a British bullet found its mark, Mwangeka.

Mwangeka’s soldiers could not believe that their leader was dead. Even the loss of many Taita soldiers could not compare to the grief of Mwangeka’s demise. Mnjala Wa Ruma, Mwangeka’s second in command gathered his people into the Vuria caves which were their last line of defence. After the intervention of the French missionaries, there was peace in the land but the trade routes were now under the control of the British.

Under colonial rule, the unique forests of the Taita Hills were replaced with plantations of fast-growing exotic trees. As the population grew, people also farmed higher on the hills. As a result, only small forests remain on the tops of the hills. These forests are home to birds, butterflies, amphibians, trees and other plants found nowhere else on Earth. Therefore, the Taita Hills are a Key Biodiversity Area. People come from all over the world to see birds such as the Taita Thrush and Taita Apalis.