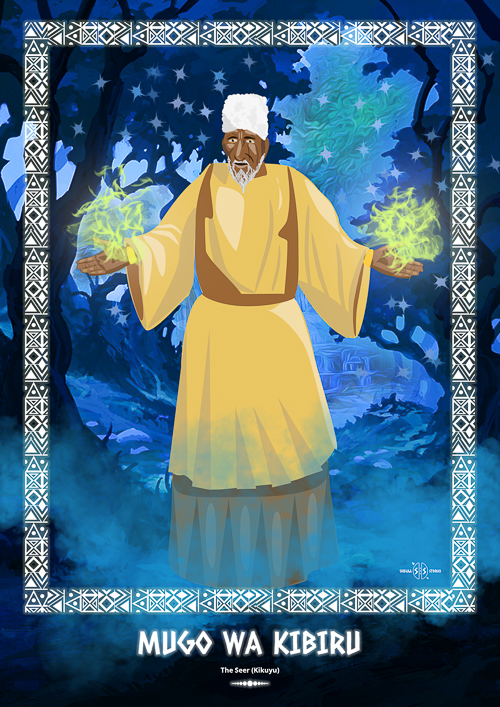 Mugo wa Kibiru was born in Kariara, Murang’a near Thika somewhere between the 18th and the 19th centuries, his parents are unknown. He was a famous Kikuyu prophet.

According to Kikuyu folklore Mugo was found alone in the forest by a hunter called Kibiru as he was inspecting his traps. Kibiru was from the Gikuyu Anjiru clan who were traditionally associated with prophecy and powerful medicine. How Mugo came to be in the forest is not known. Even more mysterious is that when the hunter asked where he had been before, Mugo told him that he had been with Ngai, God. The hunter decided that he would adopt the young Mugo, known as Cege at the time and bring him up as one of his sons not knowing the greatness that he would possess in later years. Thus, he became Cege wa Kibiru. The name later changed to Mugo, which means ‘healer’.

As a young boy, before circumcision, his chores were looking after his father’s goats with the other boys. Out in the field, he would often leave his age mates and go into the forest without fear of wild animals. As it was with other medicine men of that time, he possessed the powers to control animals hence why they did not harm him. When they asked him where he had been, he would reply that he had been with God, Ngai.

When Cege grew up, he begun prophesying. He prophesied about the coming of the white man. He said that there would come a strange a race of people whose skin color was like that of a small pale frog that lives in water (Kiengere) and that one could see their blood flowing under their skins just like the frog. He also said that these pale strangers would have colorful clothes that were colorful like butterflies (ciiuhuruta). He warned the Gikuyu that was it foolish for their warriors to ever face these pale strangers with spears because of their magical sticks that produced fire (guns shooting bullets). The White men also carried fire in their pockets (matchboxes).

Part of his prophecies also foretold the destruction of Kikuyu tribal customs where the Gikuyu youth would start copying the behavior of the White Men. Cooked food which was previously not sold in the Gikuyu custom would also be sold by the road side. The plains where the Maasai used to graze their cattle would be turned into farmland and a great famine would occur just before the coming of the strange men.

Mugo wa Kibiru also foretold of the building of the Kenya-Uganda railway, which he described as an iron snake having many legs that swallowed the white men and spat them where it stopped. The iron snake, Mugo said, would have a bushy head that bellowed smoke.

One of his most famous prophecies was that death of a fig tree growing in Thika that would die only after the white men left the country after having colonized it for sixty-eight years. Even the white men acknowledged Mugo’s powers of prophesy and tried fencing off the tree in an attempt to prevent anything from happening to it but shortly, after independence the tree was struck down by lightning.

Mugo wa Kibiru made prophesies about the future, and some of them were warnings for his people. Today it is scientists who warn us about the future. If we continue to clear forests and burn fossil fuel, the Earth’s temperature will rise. Warmer temperatures will make life very difficult. Let’s do our part in Kenya by conserving all our forests!