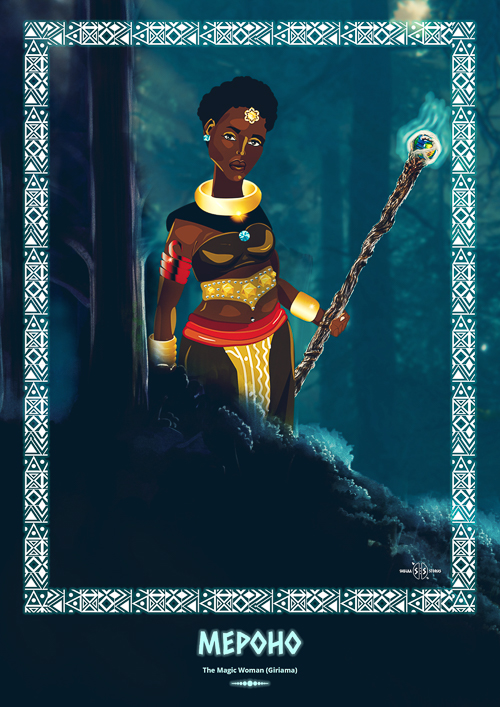 Mepoho was a Mijikenda diviner of repute.

Little is known about her birth but it is claimed that she was adopted. It is said that she was discovered at a pond one chilly morning near Kaloleni as a group of women went to fetch water. The women were even more shocked when they saw that the baby girl had been wrapped in a blue cloth (Musimbiji) that according to traditions was used by diviners among the Mijikenda. Diviners are similar to prophets and female diviners of the tribe wore the blue cloth referred to as Hando ra Musimbiji.

The fact that the previous night it had rained heavily, accompanied by strong winds mystified her discovery even further because there was no way someone would have walked in that weather to leave the baby near the pond. Even when the residents of the area near the pond tried to find out if there was a woman who had given birth recently they could find none. Neither did the woman who picked up the baby explain her reasons for rescuing her.

The baby girl, Mepoho grew up, and became a diviner. She could foretell things that would happen in the years to come. Usually, the diviner would take part in a spiritual dance which, upon being possessed by a spirit, she could then prophesy. She could foretell of any calamities such as drought, famine or floods.

There is a shrine at Kaloleni which is believed to have been Mepoho’s sacred place. It is not clear whether she lived to attain old age but it is believed that one day, she demanded that a spiritual dance (ngoma za pepo) be performed at Kaloleni as she had a very important prophesy to give the tribe. As the dance was performed, seated on her traditional three legged Giriama stool, Mepoho was possessed and began to narrate her prophesy. She said that there would come a people with white hair like sisal fibres and when they come, the tribe would witness the vehicles in the sky, on the waters and on the land. They would see young girls giving birth to babies and they (the people with white hair) would also take snuff(tobacco). She then warned the tribe that when these things came to pass, their culture would be destroyed and their land would be taken away from them.

As she finished her prophesy, she told the people that she was tired and would not want to be around when her prophesy came to pass and therefore, she was going away. Beneath her stool, the earth opened and she was swallowed alive. This happened at the present day Kaloleni shopping centre, a few metres away from the Mombasa bus and matatu terminal.