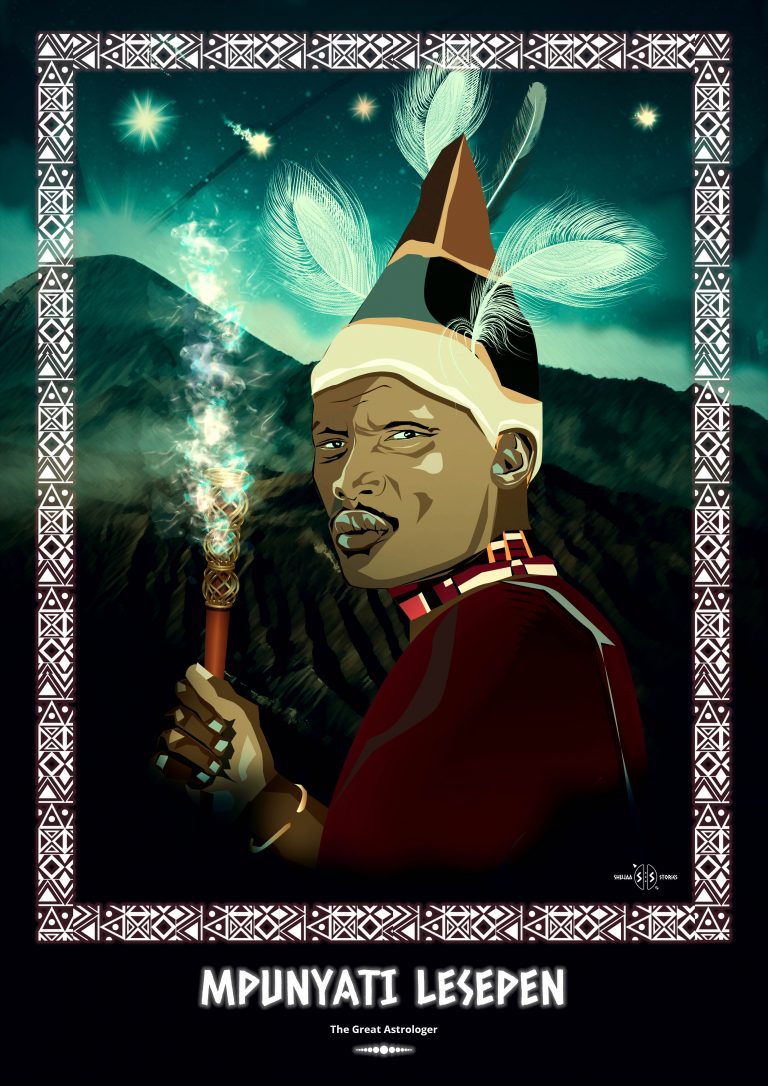 Many years ago, legend has it that Sof Omar migrated from Borana people into Samburu land and adopted the name Lesepen. They are a mystical family. It is said that they possess the ability to foresee events by reading the stars. The stars are therefore very symbolic to the Samburu. To date, the Lesepen family is held in high regard by all Samburu.

Among the Samburu, each male appoints his (male) successor who communes with the stars and conveys astral messages to the community. This brings us to the story of Mpunyati Lesepen.Mpunyati Lesepen, was born in the 1800s. He belonged to Lmarikon, an age-set initiated around 1879.

Being a Lesepen, Mpunyati was very close to Nkai meaning ‘God’. He was able to communicate to Nkai and would pass Nkai’s messages to the Samburu people. While he was dreaming in his sleep, he could see visions of the past, present and future. Other times, these visions were brought by using divination objects or intoxication. The visions could tell the coming of droughts, enemies, diseases or any other natural calamity. He would then warn the people about them.

Mpunyati also possessed divination gourds (or cattle horns) called nkidong from which he could cast divination stones. This was not the only skill he had, as a Lesepen, had the secret knowledge to prepare mystically powerful medicines (ntasim in Samburu) which are used to treat supernaturally caused disorders such as infertility, blindness, insanity, and livestock deaths. It is known that Samburu loibonok do not officially participate in the age-set rituals of the warriors, and they have no particular political inclination. A Lesepen, was, therefore, called upon severally to protect warriors with ntasim before they went to battle.

The Lepesen dynasty continues to date. Mpunyati Lesepen had a son, Lokulume Lesepen, another great Samburu astrologer who lived in Ng’iro. Ldumeme is the current astrologer. He predicted the 2007 post-election violence and Uhuru Kenyatta becoming a Kenyan president.

Samburu are nomadic pastoralists. They follow patterns of rainfall, seeking out lush pastures and water for their cattle, camels, goats and sheep. Clad in a striking red cloth wrapped like a skirt and a white sash, the traditional dress of the Samburu tribe is embellished with vibrant beaded earrings, bracelets, anklets and necklaces. The colourful, decorative jewelry reveals and represents the status of an individual. A significant and essential part of the Samburu culture is the art of dancing. Men dance in a circle and jump high from a standing position. They merely use their voices to complement their singing and dancing, no other accompaniments. They reside in a stunning, sparsely populated part of Kenya prolific with wildlife.