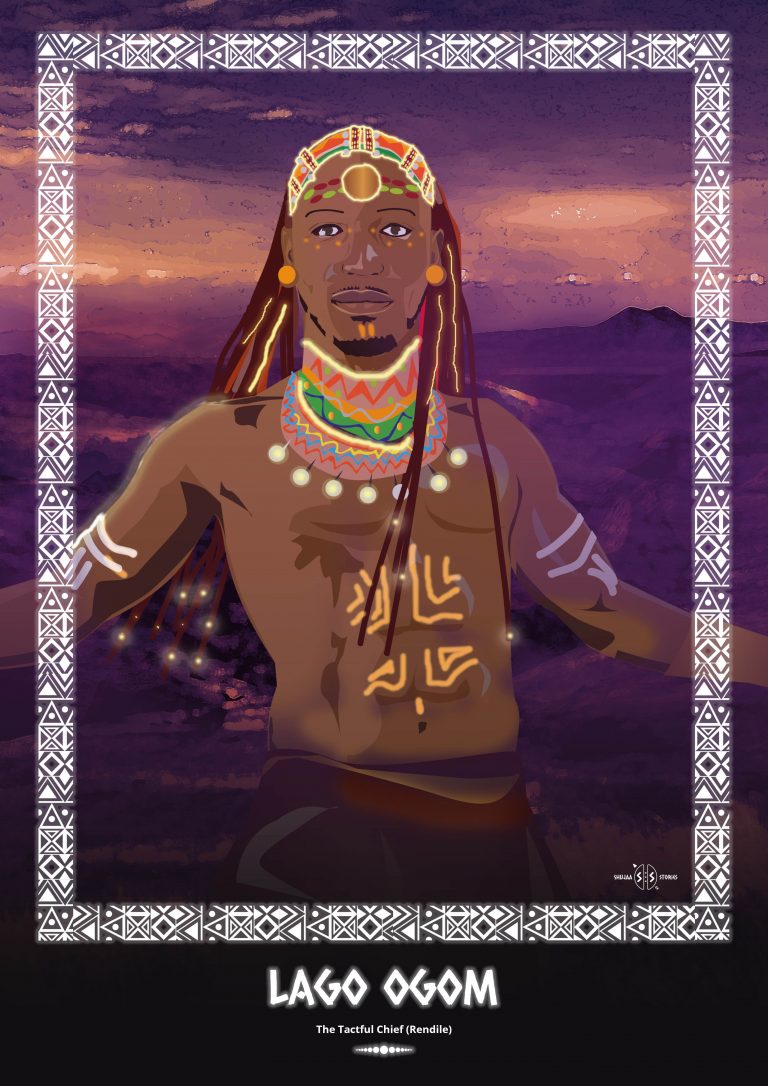 In the vast lands of the North Eastern part of Kenya, particularly the Marsabit District, there lives the Rendile community. They are mostly concentrated in the Kaisut Desert and Mt Marsabit. Traditionally, Rendile are nomadic pastoralists, tending camels, sheep, goats and cattle. And like most communities, the Rendile have a few individuals who stood out in their community. One such person was Lago Ogom.

Lago Ogom, was a supreme ruler. He was the paramount chief manning the Northern Frontier Districts of Isiolo, Marsabit and Moyale. His greatest contribution was education of the nomadic children.

The amount collected from the sale of these skins was used to pay teachers’ salaries, build classes, provide meals as well as boarding facilities for learners.

Lago Ogom faced many challenges. The British colonial administration did not support education of the native African communities. On the other hand, the Rendile families refused to send their sons to school because they felt doing that would be supporting an ‘alien’ tradition. In other words, Lago Ogom was faced with the tripartite dilemma of the Rendile fearing losing their sons to a foreign culture contending with the passion he had for his people to gain education and overcome colonial rule. On the other hand, the colonial government feared educated Africans would be uncontrollable, while the chief feared the colonial policies were oppressive to the uneducated Rendille.

Lago believed that the only way to suppress colonial rule was learning the ways of the white man, by going to school.

Lago Ogom had to bribe the Rendile families. He gave each household 30 goats, for them to enroll children to school. It was also to pay for the teacher’s salaries, building the school, maintaining boarding facilities. Meals for the borders were solely from the sale of the sorio skins.

By this time, the colonial administration had discouraged formal learning. Chief Lago Ogom was able to take more than 30 boys to school. They proceeded to the intermediate school outside Marsabit. Some of the pioneer students were the late Kholkholle Adichareh, who later became the MP for Marsabit South, the late Philip Legwanani, former clerk to Marsabit county council, Nchude Kahle, the first Rendile inspector of police in the colonial administration and many others.

Lago’s contribution to education surpassed any efforts of his successors. Convincing his people to accept sending their sons to school and taking personal responsibility by compensating parents who agreed to take their children to school and in some instances, motivating those parents with some camel heifers. He single-handedly fought to overcome bad policies of the colonial government that subordinated native African schooling and ignored allocating government funding to local education.

The town of Marsabit is an outpost of urban civilization in the vast desert of northern Kenya. The town is situated on an isolated extinct volcano, Mt Marsabit, which rises almost a kilometer above the desert. The hills here are heavily forested, in contrast to the desert beyond, with their own “insular” ecosystem. The town currently has a population of about 5,000 people. It is mainly inhibited by the Cushitic-Speaking communities such the Borana and Rendile.