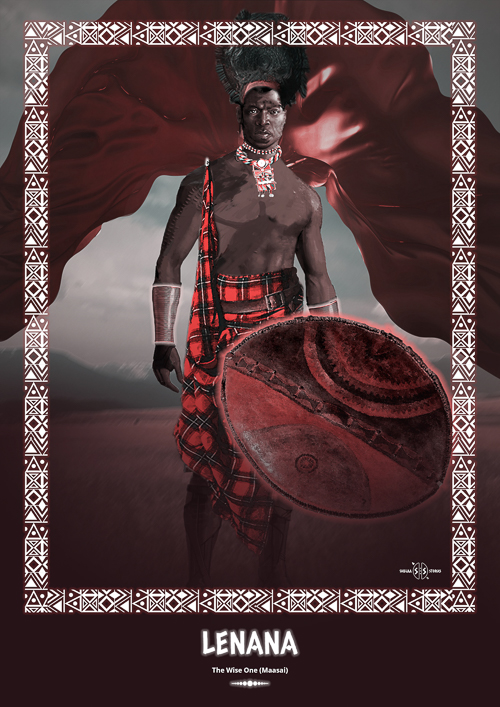 His life began when one of the 100 wives of Mbatian gave birth to a baby boy at Ngoshua near Monduli at the foothills of Mt Kilimanjaro. Although he was born in a household with many children, he was his only mother’s son. It is said his father, Mbatian was a descendant of the famous Inkindongi, a man with prophetic powers who had wandered into Maasai land hundred of years before by chance. Inkindongi was rescued by a herdsman then taken to the Ilaser clan. After that, all Inkindongi’s descendants would later be known as Laiboni.

As is customary with Maasai traditions, Lenana was initiated into the Il Talala age group by circumcision rites. Like all his father’s sons, he apprenticed as a prophet owing to his hereditary prophetic powers. He was at a disadvantage because his father preferred teaching his elder brother Senteu to carry out the duties of a Laibon while dealing with his clients. Lenana was wittier than his brother. He perfected the Laibons skills by watching his father work whenever opportunity presented itself and in no time, he had his own following of clients.

When Mbatian was about to die, he said that whichever son he would call to his deathbed would inherit his place as Laibon. Lenana had by then come of age after being initiated into adulthood. He got word of the situation and taking advantage of his father’s senility and partial blindness inherited the position of Laibon, which was meant for his brother Senteu. This became the beginning of rivalry between the two brothers, which was further escalated by drought, animal and livestock diseases. Lenana’s stronghold was severely weakened four years into his rule. In addition, he also came under attack from the Kikuyu further worsening his situation. The frequent wars aimed at restocking livestock after the droughts and disease , grew so serious that they spilled over into the then British protectorate of Tanganyika forcing the IBEA to intervene. It is here that Lenana sought collaboration in return for tracking down his brother Senteu who was causing the British territories trouble by raiding and stealing cattle from other Maasai clans.

The collaboration between Lenana and Francis Hall of the Imperial British East African Company flourished in the wake of seeking to confront common enemies and trade ties. In 1898, when Senteu’s warriors crossed over from German controlled Tanganyika to launch another attack, Lenana was appointed Paramount Chief in order to closely monitor him and stop him from causing a diplomatic row. In the years that followed, the Maasai would concede their lands to the British through a series of bogus agreements.

Thereafter, Lenana’s powers as a Paramount Chief drastically reduced as did did his usefulness to the British. Lenana’s legacy lives on in through the naming of one of the peaks of Mt. Kenya after him.

The Maasai community lifestyle is mainly pastoralism, which has been compatible with wildlife conservation. For example, traditionally the Maasai people did not eat wild animals. Today however, when there is human-wildlife conflict, pastoralists sometimes try to poison predators. Scavenging animals and birds such as vultures are also poisoned. Then we lose the crucial work they do of keeping the environment clean. Let’s recognize the traditional Maasai values of letting wildlife live!