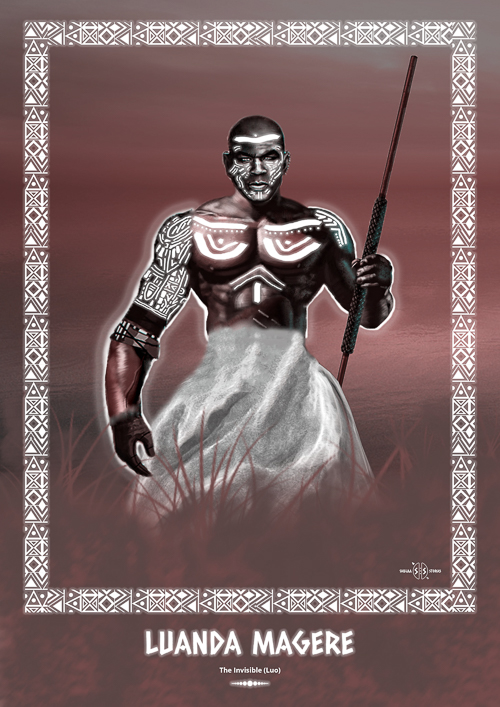 Among the Luo community, no warrior has had a profound effect that is perhaps felt to date than Luanda Magere, son of the Sidho clan. His name means the ‘fierce rock’, or the rock that builds and this shows just how mighty this warrior once stood.

Tales are told of his unearthly powers and his skin of stone. It is said that spears, arrows and clubs simply bounced off his body making him indestructible. Of the most outstanding things he did, his extraordinary ability to tear entire armies apart is the most celebrated. Of all the communities that stood witness to his supernatural powers, the Nandi bore it the most. The Nandi were the Luo’s traditional enemies at the time and were very good at fighting especially at night. On the other hand, Luanda Magere and his tribesmen were better fighters during the daytime. While people were fighting, Luanda would be seen at home smoking tobacco but if he heard that the Nandi were threatening his people, he would ask that his shield and spear be brought immediately. The ensuing battles would have Luanda strike down so many Nandi Warriors at once that the rest would have no option but to flee. So afraid of the mighty Luanda were the Nandi that whenever they would hear that he was also on the battle field, they would all run back to their lands. Magere would at times even follow them to their homes and take their most prized possessions and cattle without any opposition. It eventually reached a point the Nandi gave up fighting Luanda as they did not know what to do to defeat him. They left him alone, deciding that he was indeed God’s creation

Luanda’s downfall however, came in the form of his Nandi wife. The Nandi had given him their most beautiful girl so that he could leave their cattle, which were their main source of livelihood, alone. It so happened that one day Luanda fell sick and his first wife was not around to nurse him. He chose to call his Nandi wife to bring him medicine. He instructed the Nandi wife to cut his shadow with a knife to administer his medicine. Imagine her shock when she saw the shadow bleeding! That same night, the sly Nandi wife sneaked back to her people and told them of Luanda’s secret and they attacked, using the element of surprise at night. Caught unprepared, Luanda and the Luos fought bravely and outmatched the Nandi. The cowardly attackers retreated in defeat. One Nandi warrior remembered that Luanda’s shadow bled. He stood atop raised ground and struck a spear into Luanda’s shadow. Alas! The mighty Luanda fell down and died and his body turned to stone.

Strong wind blew over the land of the Nandi and Kano, the land of Luanda’s people, followed by a two-year drought. Luanda appeared to the Luo elders in dreams and told them where he died.

The place he died is still revered and people come from far and wide to conduct rituals and prayers at the stone. His story is passed down from generation to generation through oral tradition.