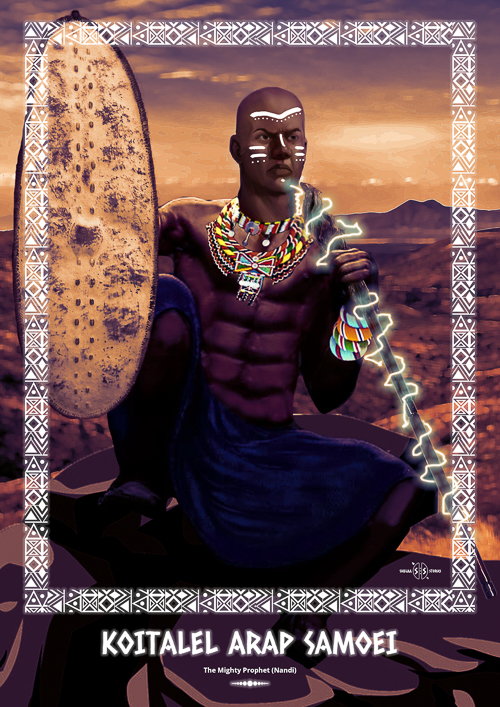 Koitalel Arap Samoei was born to Kimnyole Arap Turukat at Samitu in Aldai in 1860. He was the lastborn of four sons and belonged to the Kaplechach age set. He was the closest to his father and had a great ability of understanding prophetic signs compared to his brothers.

At twenty-five, Samoei succeeded his father as the Orkoiyot, the supreme spiritual and political chief of the Nandi people. The Orkoiyot was traditionally from the Talai Clan of the Nandi who were believed to have been picked by God, Asis, to deliver messages to the people.

Samoei prophesied about a black snake passing through the land of the Nandi, spitting fire. Not long after that, came the Kenya Uganda Railway, and the British with it too. As the intruders neared the land of the Nandi, wanting to build through it, Samoei would not have strangers in his land. He rallied his tribesmen, and fighting began. The Nandi were really good fighters, even in the face of British guns. Samoei was also a very strategic military leader, planning attacks on the railroad workers and the British when they least expected. He resisted the British fearlessly and as if that was not enough, he stole their rail construction materials and used them for making ornaments and more weapons.

For twelve years or so, the British could not capture him nor stop the Nandi and were very humiliated. They called for a truce meeting instead to negotiate with Samoei. Each party was to come accompanied by five people.

Unknown to Samoei and his tribesmen, this was just a trick to trap and harm him. Richard Meinertzhagen, a British Colonel had marched from Nandi Fort with eighty armed men, seventy-five of whom hid around the meeting place. Samoei went to shake hands with the Colonel and got shot as were his tribesmen. Only one of Samoei’s men escaped to tell of the incident.

This marked the end of the Nandi resistance. Having lost their greatest Orkoiyot they could fight no more. The railway building continued uninterrupted through the Nandi’s land.

Today, there is a museum built in the Nandi Hills to commemorate Koitalel and there are efforts

Samoei was both a prophet and a military leader. Today we need people with such abilities to fight different battles – to fight poverty, disease, and environmental destruction. The environment is the base of our economy and our life. To live, we need clean air, water, and productive land. To have clean air, water and productive land, we need to keep our environment functioning. Protecting forests, wetlands and other ecosystems is not just for wildlife – it is for our own benefit.