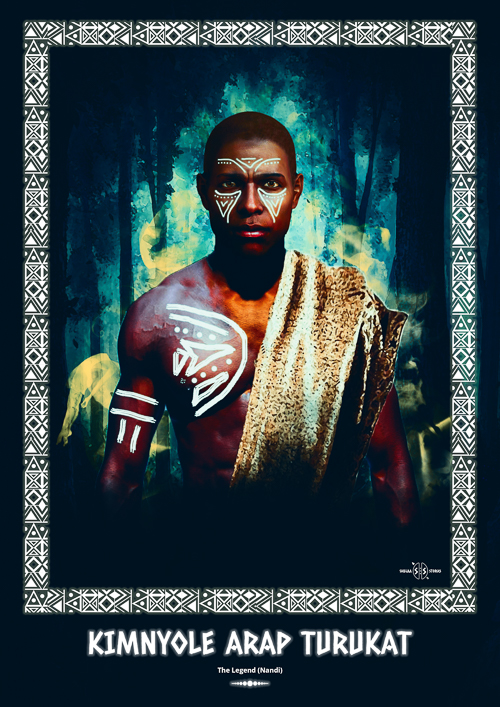 Kimnyole Arap Turukat was the fourth Nandi Orkoiyot in the early 1800’s. The Orkoiyot was a spiritual and military leader who was consulted on decisions regarding security particularly the waging of war. Kimnyole is remembered for his powerful prophecies, which forever altered the lives of the Nandi.

His exact year of birth is unknown, but he was the son of Turukat and father of Koitalel Arap Samoei. At his prime, he stood regal, animal skin draped over one shoulder and a stick in hand. His earlobes extended from the weight of the metallic traditional earrings he wore. The colour of his skin was dark as ebony and the muscles underneath were still taut with youth. He was both warrior and leader, commanding fear and respect alike.

Kimnyole had two prophesies to his name, the coming of the “white tribe” (the whites) and “the Iron Snake” (the construction of the Kenya Uganda railway).

During his reign, the Nandi were a formidable force, in spite of the many conflicts with the Maasai during the 1870’s and 80’s. As the Maasai fought against themselves, the Nandi under the leadership of this shrewd Orkoiyot were observant, eager to exploit the divisions among the Maasai. With such a leader, nothing could stand in their way and they were about the wealthiest tribe around with lots of cattle and captives from their victories.

Even then, Kimnyole’s reign was not without trouble. In the late 80’s, rinderpest cattle disease struck the Nandi herds. His people were bitter with him because he had not warned Nandi warriors against capturing rinderpest infected cattle from their raids. Only his cattle survived and that only made the growing hostility against him worse. The salt to this injury was the loss of large number of Nandi warriors, bororiosiek, when Kimnyole advised against a joint raid of more warriors.

It was unheard of for the Nandi to rise up against one of their own, but Kimnyole stood accused by his people. In 1890, Kimnyole was stoned to death because of his prophecies that had caused the Nandi strife. However, some say it is because his prophecy on the Nandi being subdued by the white man upset powerful tribal elders.

After his death, his son Koitalel arap Samoei succeeded him while his brother Kipchomber Arap Koilege became the first Orkoiyot of the Kipsigis division of the Nandi.

South Nandi and North Nandi forests are recognized Key Biodiversisty Areas in Kenya. The forests are home to birds and plants from highland forests and from western rainforests. The Nandi forests catch, store and release rain and protect the soil from erosion. Thanks to the forests, the farmlands are productive.