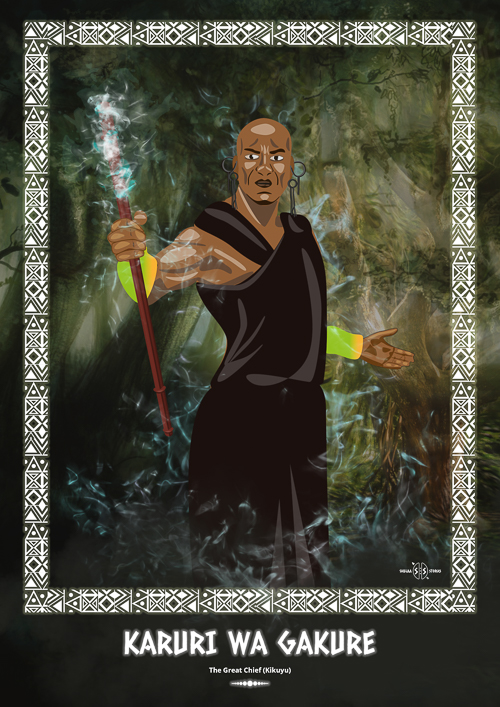 He was born in Gathigiyo, in Iyigo to a father who was of the Angari clan and a mother, whose name was Wangari. His two blood brothers were Kiguma and Ngaru, while his sisters were Wambui, Muthoni and Gacoki.

Young Karuri displayed leadership qualities among his peers, consequently, they named him mutongoria which meant leader, and the name stuck. He belonged to the machungya makuru (old stealers of clothes) age set.

Growing up, Karuri hunted elephants for ivory to trade with the Arabs. To supplement his income, he decided to become a traditional medicine man even though he had never apprenticed to be one. For thirty goats, he bought his first herbs from Githaiga wa Muya, Gikemi wa Karura and from the Ndorobo in the nearby forests.

He was initiated into the trade as a traditional doctor in a big ceremony soon after and with that, he became famous. His fame increased further when he gave war medicine to the Kikuyu warriors of Karura in Kiambu to help them triumph over the Maasai warriors of Naivasha. He led the Kikuyu warriors to battle after giving them the medicine that was rumored to make them invincible. Karuri went to battle with the warriors as the muthigani wa njama, leader of the war council. As the muthigani, he carried githitu, the war medicine without which the warriors would surely lose. The Kikuyu warriors easily won due to their belief in Karuri’s medicine and his presence. With the victor’s loot, Karuri also grew wealthy and influential, and rose to become a leader among the Kikuyu.

As a leader, more so as a chief, Karuri fought with, and conquered Chief Wang’ombe who had been allied to the Maasai. Chief Wang’ombe had been unhappy with Karuri’s fame and power and thought that he could defeat him by taking advantage of the famine in Karuri’s land. He also defeated Chief Ndiuni wa Murathimi and his brother, Igambi. Thereafter, he was feared by all the lesser chiefs.

During the invasion by the Europeans, Karuri supplied labour to IBEA company at Fort Smith, now Kikuyu town for the construction of the Uganda Kenya Railway. He also welcomed the Consolata fathers from Italy, offering them a place to build their mission station as well as safe passage through his land. His cooperation with the colonial government, notably through Francis Hall (nicknamed Nyahoro by the Kikuyu) would later have him made paramount chief. Karuri served as a go between for people who wanted favour with the colonialists. In return, people would bring him gifts making him even wealthier.

On January 14th 1916, Karuri aged seventy, was baptized Joseph, while his then wife, Wanjiru became Consolata. The ceremony also included a Christian wedding to his wife, hence renouncing all the other wives (around sixty of them) as illegitimate. The great paramount Chief Karuri passed away on 16th May 1916 and was buried in Tuthu.

In the old days, medicine men and women could collect medicinal herbs from the forests. Today, these plants are becoming rare because of over-collecting. Conserving our environment is not just protecting wildlife – it’s also protecting our traditional knowledge and cultural heritage.