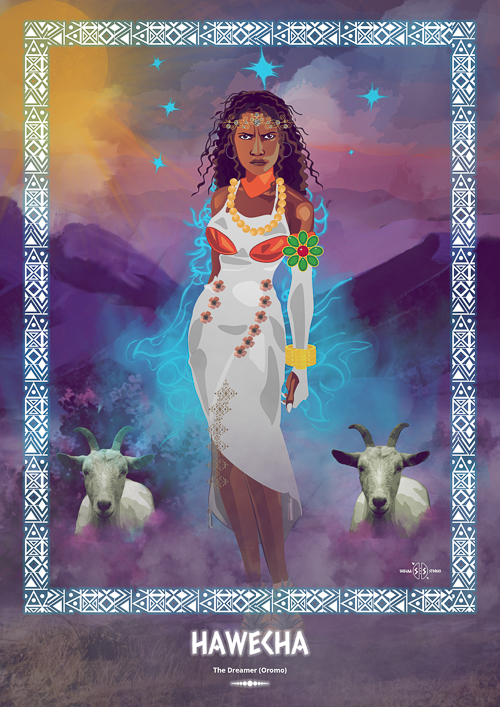 Two hundred years ago, a girl was born into the Oromo tribe. At a time when men ruled the world and young women had no authority whatsoever, Hawecha gradually rose to a position of unprecedented leadership and power becoming the most famous prophetess of the Oromo people.

High cheekbones, long nose, wavy soft silken hair and a scarf rustling in the wind. Goats bleat, some grazing on the tough underbrush while others lay under the shade of thicket, sheltered from the noonday sun. A typical Oromo woman looking after goats in the vast expanse of what would later be the Ethiopian-Kenyan border; this might have been Hawecha, had she not risen up the ranks to become one of the first women leaders in her largely patriarchal community. Women were there to be seen and not to be heard.

Like any other Oromo girl, two hundred years ago, Hawecha was born into a perhaps small Oromo family. Her father, was of the Gono half of the Oromo tribe and she, as tradition dictated, would be married into the Sabba half of the Oromo tribe. She was raised by her mother, since her father died early in her childhood. She also had a baby sister, Dhaki who died while young, robbing her mother and she, of happiness.

Her nickname was ‘the dreamer’ among the villagers. Unbeknownst to them, this lanky little girl would someday dream dreams of the future, a prophetess, living up to her very name. At the age of eighteen as was customary, her uncle found her a suitor to marry. Juldess was his name. Her marriage did not last long nevertheless, because her husband had eyes for other women.

Among her prophecies, which came in the form of dreams, was one of disease and another one of drought and famine. That was not all; Hawecha also saved her people from war and devastation and death. Hawecha became the greatest prophetess among the Oromo and is remembered through their oral history. Passed down generations by word of mouth and making for great stories that are told at the hearth of the fireplace by Oromo folk. In her memory, the first school in Marsabit was named after her. The Catholic Mission built it in 1986 and draws from her life as inspiration-Hawecha Primary School.

Hawecha was able to predict a famine. Today, climate scientists warn us that climate change will mean more droughts and more floods. When food crops can’t grow, there might be famine. We need to prepare for climate change by growing a variety of different crops, including traditional food crops. We must leave forests to grow on hills and steep slopes, and protect the banks of rivers and lake