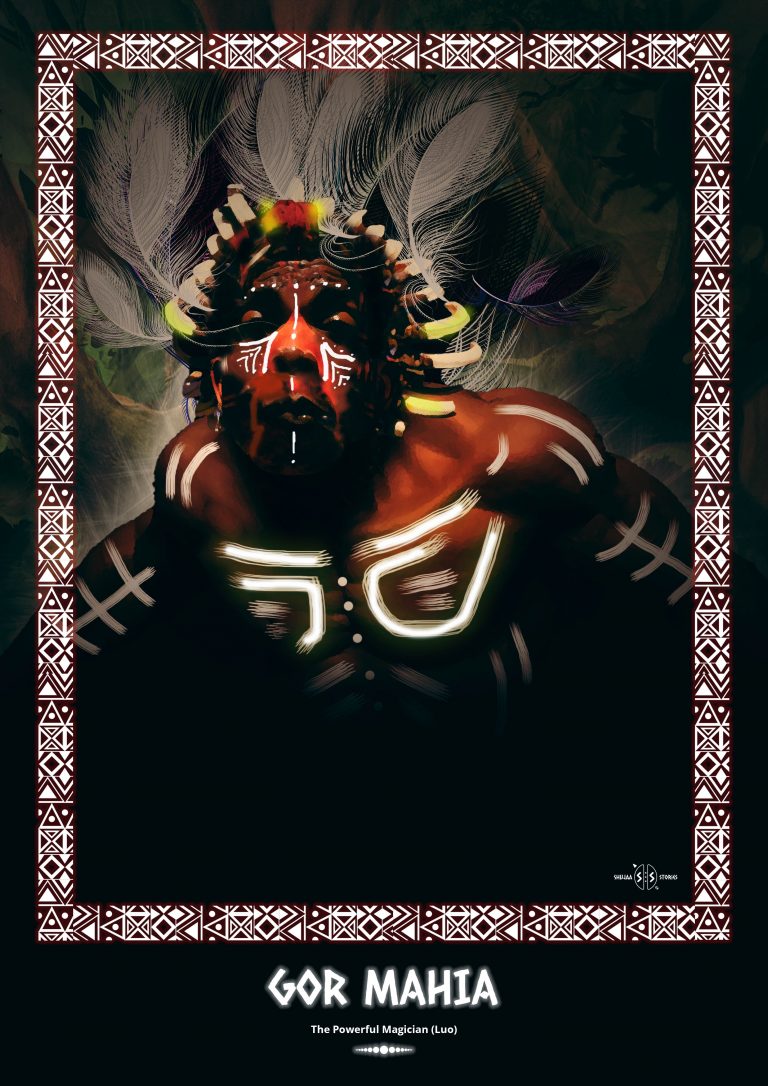 Gor Mahia son to Ogada and grandson to Ogallo was a prominent Luo hero born in the late 18th century, who used magic and miraculous powers that he inherited from his grandfather to rule his people.

The waters shimmer as the orange twilight rays of the setting sun dance atop the waves of the great Lake Victoria. Luo fishermen on the beach sort the days catch as the pelican and the kingfisher fly above.  This is where the great Gor Mahia was born. Here where the gentle breeze whistled through the papyrus reeds on swampy beaches of the lake.

Gor was raised as a normal child alongside his siblings. His birth name was Gor Obunga, inherited from his forefathers. Gor’s father was called Ogada Ogallo from Kanyamwa  and his mother was Atoka Nyokado from Kanyada. Gor was the only son of Atoka in Ogada’s polygamous family.

It is said that it was difficult to distinguish whether Gor was a spirit or a human being. Legend has it that he inherited his supernatural powers from his grandfather Ogallo. Gor’s mother died early. One day, his grandfather summoned all the children of Ogada to bless them. Gor was only five years old. A ceremonial bull was slaughtered and Ogallo started blessing each child with the meat from the bull. When it was Gor’s turn, Ogallo did something different, choosing instead to give him his mother’s ashes to bury in her hut. This experience became the origin of Gor’s powers. He became a mystery even to Ogallo who had blessed him. The miraculous things that he did earned him the name ‘Mahia’ meaning strange and lethal.

Growing up, Gor possessed magical powers as well as the powers of prophecy. His most notable prophecy was manifested in a vision where he saw ‘baby-like’ creatures, who were as unstoppable as locusts. With this, he travelled to Karungu to caution warriors against confronting these creatures, despite the fact that the warriors were famous for conquering all enemies. Gor warned them that should they attempt to do so, they would all be defeated because these creatures had sticks that spit fire-guns.

This was just but an ounce of the powers that Gor Mahia possessed. Most of his powers are shrouded in mystery to this day. The extent of his magic was so powerful that today herbalists visit his grave to partake of those powers. However, people are warned against picking leaves of the plants and even stones around his grave without permission from Gor’s living descendants. Any contact with Gor’s grave is rumoured to disturb his spirits and those who do so, are rumoured to fall sick and sometimes die.

Today, the great Gor Mahia is still celebrated in the form of Gor Mahia FC, a prominent football club in Kenya whose prowess has been unmatched. Indeed, the powers of Gor Mahia live on.

Wetlands have powers that seem magical – like Gor Mahia. Papyrus wetlands protect the shore from erosion and filter out silt and chemicals. They store carbon dioxide – one of the “greenhouse gases” that cause climate change. Papyrus swamps like Koguta Swamp, Yala Swamp Complex, Dunga Swamp, Sio Port Swamp are recognized as Key Biodiversity Areas. These wetlands provide habitats for birds like the Papyrus gonolek that live only in papyrus swamps.