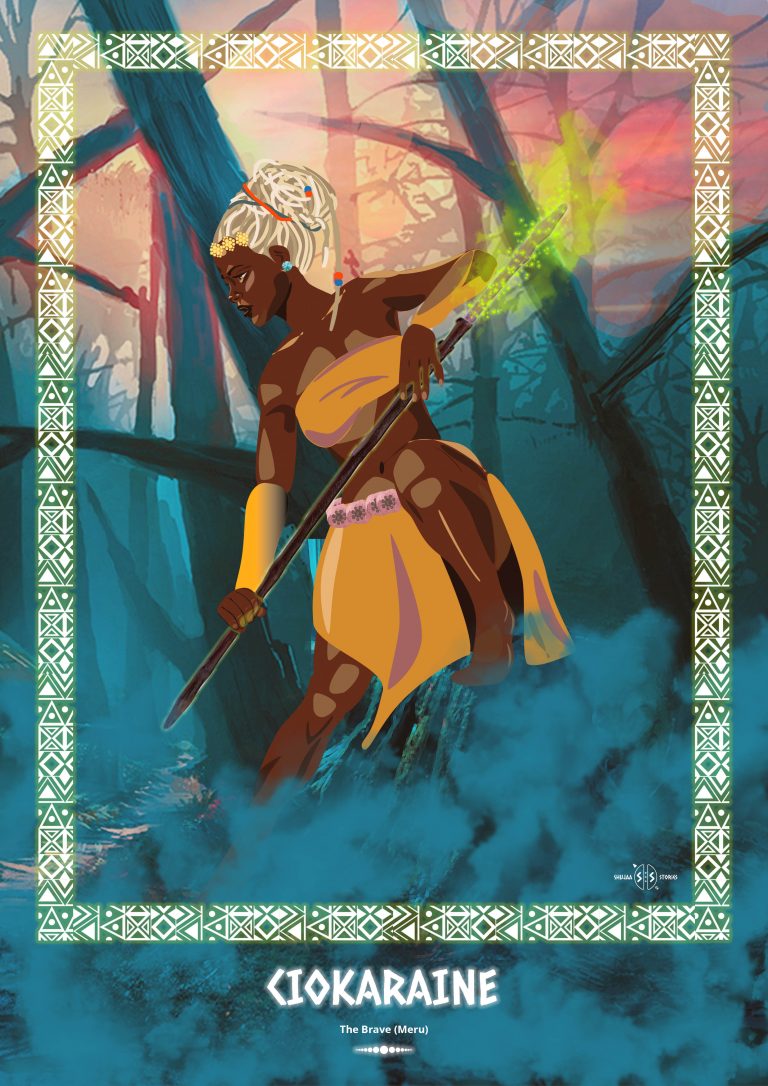 Ciokaraine was born in 1909 in Gauki, Igembe Location of Meru District. She and her siblings were orphans. They were raised by their grandfather, Kiabira wa Mwichuria, a prominent “mugo” or medicine man.

Ciokaraine was her grandfather’s favourite grandchild and often followed him everywhere he went on his duties treating people, most of whom were children. From a tender age, she was exposed to many forms of illnesses and treatment methods that often involved mothers and their children.

While still young, Ciokaraine showed leadership qualities and her age mates often involved her in mediating their conflicts because she was just and fair.

At 15 Ciokaraine was given a new name – Kanyiri –   by her age mates after an initiation ceremony held at Gakuo playground. Kanyiri meant one who stood out from the rest.

During the resistance to the colonial settlers, the Mau Mau dragged and killed Kibuti, a member of the Meru Council of Elders (Njuri Ncheke), forcing the colonial administration to take action against the residents of Gauki. They planned to relocate them to Kiegoi to make sure that they could not provide food to the Mau Mau.

After a few bitter meetings, where Ciokaraine stood up to the patriarchal Njuri Ncheke, the senior chief of Igembe, M’Mruaa ordered the residents of Ithima and Akachiu to gather not so far from Maua trading centre, carrying with them sacks and baskets. It was at this meeting that the colonial government noticed her. After a public announcement from the colonial government where the people were told to uproot their yams, bananas and all edible food from their farms, she stood up and fearlessly told the people not to do so.

The senior chief summoned a meeting with the Njuri Ncheke where Ciokaraine was to explain why she defied the orders of the colonial government and the male leaders. She responded that instead of destroying the crops which would cause famine, she thought that the colonial government should not only guard them but also stop the killings. She said she was ready to sacrifice her son. Her bravery changed the colonial government’s action, leading to the starting of “shamba-squatting” where the colonialists occupied all farms near the forests that the Mau Mau were hiding.

A few weeks after the meeting with the Njuri Ncheke elders, the senior chief recommended Ciokaraine for the position of assistant chief for which she was appointed in April 1954.She retired in 1959 after being involved in a car accident while on official duty. However, she still remained active in her community even after this.

Ciokaraine was as famous as Cierume of the Mbeere and Wangu wa Makeri of the Gikuyu.

An important traditional function of the Njuri-Ncheke, is overseeingsetting and enforcing rules and controlling the use and conservation of natural resources. The Njuri Ncheke regulations helped to conserve open grasslands, salt-licks, forests and Sacred Sites. It’s good to remember and uphold the values of the Njuri-Ncheke on nature conservation.