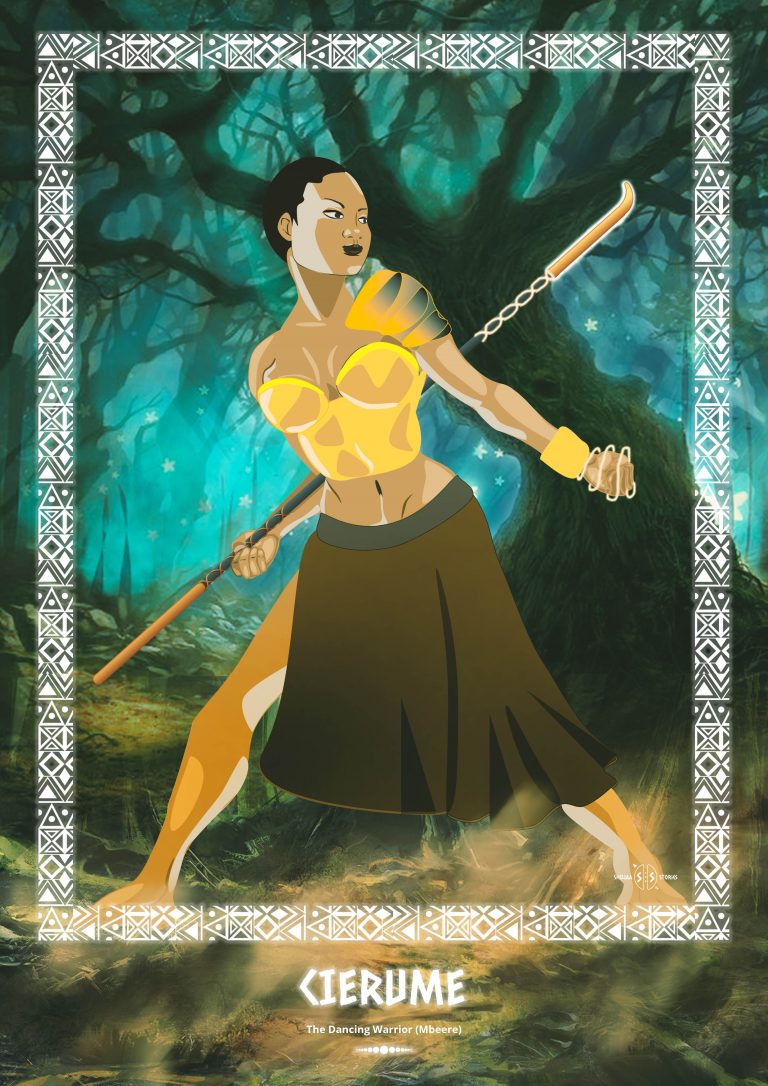 This is the story of Cierume, the dancing warrior from Mbeere who killed men with her dancing stick.

Cierume was brought into the world some time in the 19th century, before the white men had ever set foot in Mbeere land. Her name can be said to have originated from the term “urume”, which means fierceness or courage. This girl truly lived up to her name.

As time went by the girl Cierume grew into a woman, and so did her character and the people were quick to take notice.

One day, there was trouble in Mbeere land. A band of Kamba tribesmen, under the leadership of their fearsome and ruthless leader attacked the land, plundering and killing, driving terror into the hearts of the Aembu. Even the Aembu men were helpless and defeated. There was hopelessness in the land.  The brazen Cierume decided to join the Aembu men in fighting against the intruders. She was indeed brave and deserving of her name.

If a woman fighting alongside her tribesmen doesn’t surprise you, perhaps her choice of weapon will. While the men ran into battle wielding crude machetes, swords and spears, Cierume charged in with her stick. A dancing stick that she and other women used in their traditional dances. It is not known for sure whether it is the sight of a woman charging into battle or the fact that this woman was carrying a stick that surprised the Kamba warriors confusing them into defeat. Left and right, the Kamba tribesmen fell by Cierume’s stick. Even the fearsome Kamba warrior leader was no match. He was defeated shamelessly. He should have known better than to fight (or dance?) with a stick-wielding woman and lose. That is how Cierume got her first battle shield, a prize from the victory against the Kamba.

News of her deeds were soon on everyone’s lips in Mbeere. It is said that in Mbeere and Embu, no woman could be compared to Cierume. Even among the Kamba, Kikuyu and the Meru, only two women could compare to her. Ciokaraine daughter of Barungu from Meru and a Gikuyu woman named Wangu wa Makeri.

Shortly afterwards, Cierume was appointed to a leadership position. Being the only woman leader in the council of the Mbeere, Cierume was envied by some men who thought that she had no right to lead among them. Some men even went as far as speaking ill of her, spreading rumours and questioning her ability to lead saying that traditions did not allow it. At one point, a man insulted her but Cierume did not say a word back at him. She instead stood up to him and beat him mercilessly in front of his peers. He was lucky to be saved from her anger by his fellow men. Her fame continued to grow so much that she was appointed chief of the Mbeere people during the colonial era.

She fought fearlessly for her people’s rights from the British colonialists. So fearless was she it is said that she angrily called the European District Commissioner names when she was complaining about forced slavery on her people.

In the end, Cierume lost her chieftainship as a result of a conspiracy by the jealous men. In spite of this, her legacy lives on and her name continues to inspire Embu women to show determination in everything they do.

Cierume’s home area is on the eastern slopes of Mount Kenya. The mountain is a Key Biodiversity Area, World Heritage Site, National Park and Forest Reserve. Huge trees grow in the forests on the eastern slopes. They help to catch, store and release rain water. Mount Kenya is the tallest water tower in Kenya; it supports the economy through power generation and food crop irrigation. We need to conserve the Mount Kenya forests so they continue to bring us water.