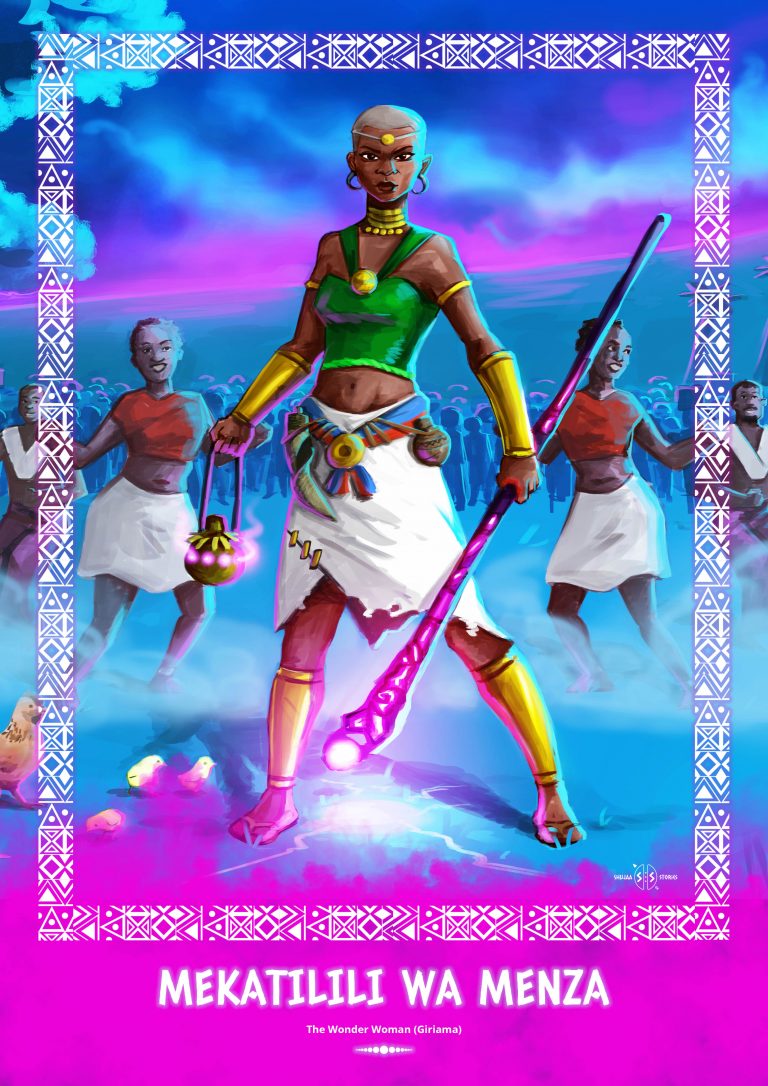 Thought to have been born in the 1840s, Mekatilili is said to be one of Kenya’s earliest freedom fighters. Her place of birth was Mutara wa Tsatsu Ganze village in Kilifi County, and her birth name was Mnyazi wa Menza. She was also born in a family of four brothers, Nzai, Hare, Kithi, and Mwarandu, and one sister. One of her brothers, Kithi was captured by Arabs Slave Traders when they had gone to trade at Kilifi with her other brothers. She remembered Mepoho’s prophesy about the coming of the strange people who had hair like sisal fibres and moved in flying vessels as well as those moving on the water and on land. She also remembered that the coming of these strangers who begin the erosion of the Giriama Cultural traditions. The prophesy came true when the Imperial British east African Company (IBEA) started building the railway.

Mekatili was married, had a son Katilili hence her name which meant ‘Mother of Katilili’. She was widowed, and this gave her more freedom to move around as a woman leader, telling her people to resist the British. The IBEA was planning to move them from their land near the Sabaki river as well as force the much hated ‘hut tax’ on them. So it was that Mekatilili used to call meetings with the kifudu dance, the Giriama funeral dance. at which she would encourage her tribe to resist and swear oaths. She is also said to have had mysterious powers that came from the kaya, the Giriama shrines.

One day, a British administrator, Arthur Champion held a meeting at Chakama kwa Hawe Wanje to encourage the Giriama youth to join the British army. With a hen and her chicks in hand, Mekatilili attended the meeting and challenged the Administrator to snatch one of the hen’s chicks in demonstration of what would happen had he taken away the Giriama youths. The angry mother hen pecked at Champion, humiliating him in the process. Champion shot dead the mother hen at which Mekatilili responded with a fiery slap. The administrator’s bodyguard responded by recklessly firing on a group of youths killing them hence the Nyere and Giriama War.

As a result of that occurrence, Mekatilili together with Wanje wa Mwadorikola were arrested and sent to Kisii to be locked in prison where in January 14,1914 they escaped and under mysterious circumstances walked for more than seven hundred kilometres from Kisii to Kilifi without the colonialists having known. She was again recaptured in August 16,1914 after much resistance in which many of her tribe’s people were shot, their houses burnt and their kaya bombed. She was sent to Kismayu, in Somalia where she again escaped under unknown circumstances. This time, the British were too busy with the World War and left her alone. Mekatilili died in the 1920s of natural causes and in her memory the Mekatilili wa Menza Festival is held.

Mekatilili is buried in an area known as Dakatcha Woodland. It’s the only place in the world where the birds called Clarke’s Weavers build their nests. The forests of Mrihi (Brachystegia spiciformis) trees protect the fragile soil, moderate the climate and store water for people and wildlife. The landscape shaped by erosion has created interesting depressions or nyari. One of them, known as Hell’s Kitchen, is a popular tourist site.