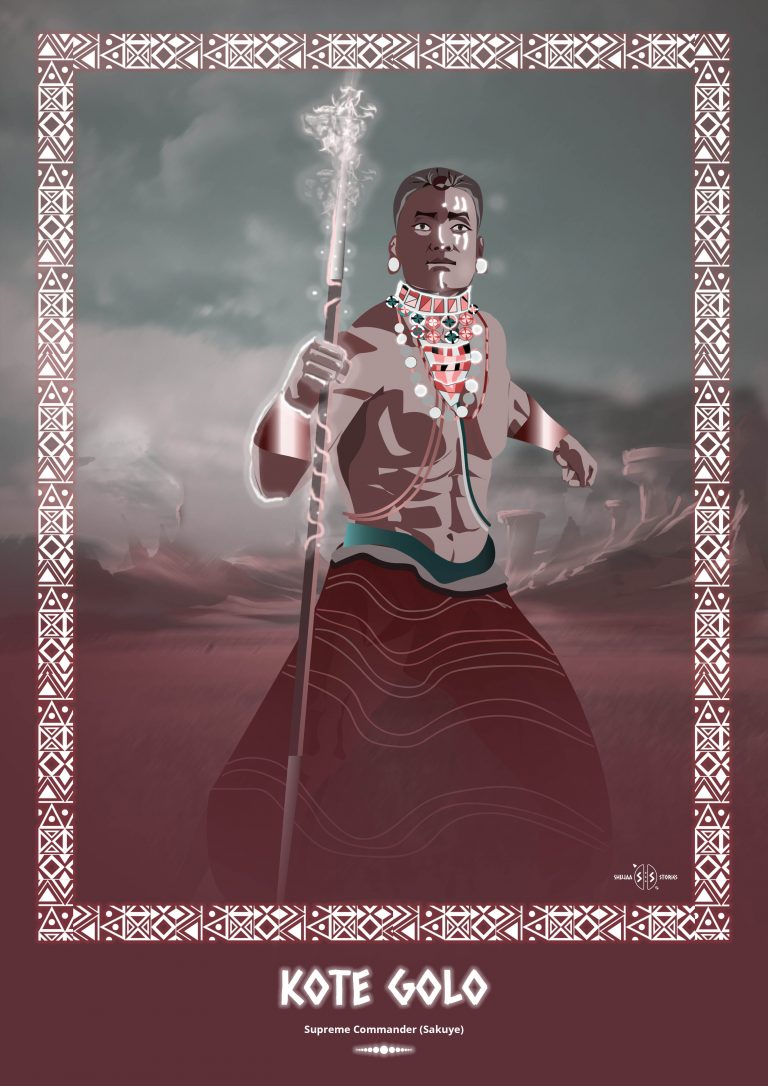 Kote Golo was born in the late 19th century near the present day Dabel,  on the Kenya-Ethiopia border.

Like other boys, he tended to his father’s camels and occasionally helped his family in subsistence farming. Golo married several wives and had many children some of whom are today. Golo was wealthy and a surprisingly skilled artist. Golo’s creative nature placed him above others in all matters.  He enjoyed carving and made all his utensils and attire accessories out of wood. In his time, he was the best carpenter.

He was a warrior par-excellence, and an innovative and strategic leader in war. Stories are told of his legendary exploits in leading the Sakuye community into war. He led in resisting attacks on his community’s livestock by raiding communities like Gabbra, Daasanach, and Borana. He was brave enough to be a lone soldier. During his youth and early adulthood, the East African region was engulfed in several conflicts. There was conflict between the Oromo and the Somali people as well as a conflict between Britain and Italy which played out in the region.

Kote Golo learnt early in life that disagreements about land boundaries could cause wars even between brothers. Italy occupied the Welwel (Walwal) oasis in the early 1930s, and launched a full-scale invasion of the Ogaden from Somali land in 1935. Kote noted that the following year, 1936, Ethiopia and the Ogaden, were proclaimed to be part of Italian East Africa. Although Ethiopia was liberated with the help of Free French and British forces in 1941, the Ogaden remained under British administration until 1948.

With no demarcated borders, Kote Golo knew there would be division of Oromo and Somali who were living in Ogaden, into the three states of Ethiopia, Kenya and Somalia. The seed for war had been sown! The lessons he learnt during the Ogaden war played a huge role in making him an excellent warrior. As he fought to save his people, Kote Golo sustained many wounds. He suffered the long term effects of these wounds but still lived to die of old age.  Kote Golo  is forever remembered by the Sakuye community for his bravery.

The Sakuye are semi-nomadic Oromo people living in Marsabit and Isiolo counties, Eastern Province Kenya. Isiolo is outstanding with an impressive landscape and ranges of hills. It is a treasure unknown to many. The Merti Plateau, the Lorian Swamp, and The Gotu Falls are among Isiolo’s great scenery. The Gotu Falls has underground springs toward its western side which are believed to have the cleanest water for human consumption. The Gotu Falls is an iconic attraction for local tourists and travelers.