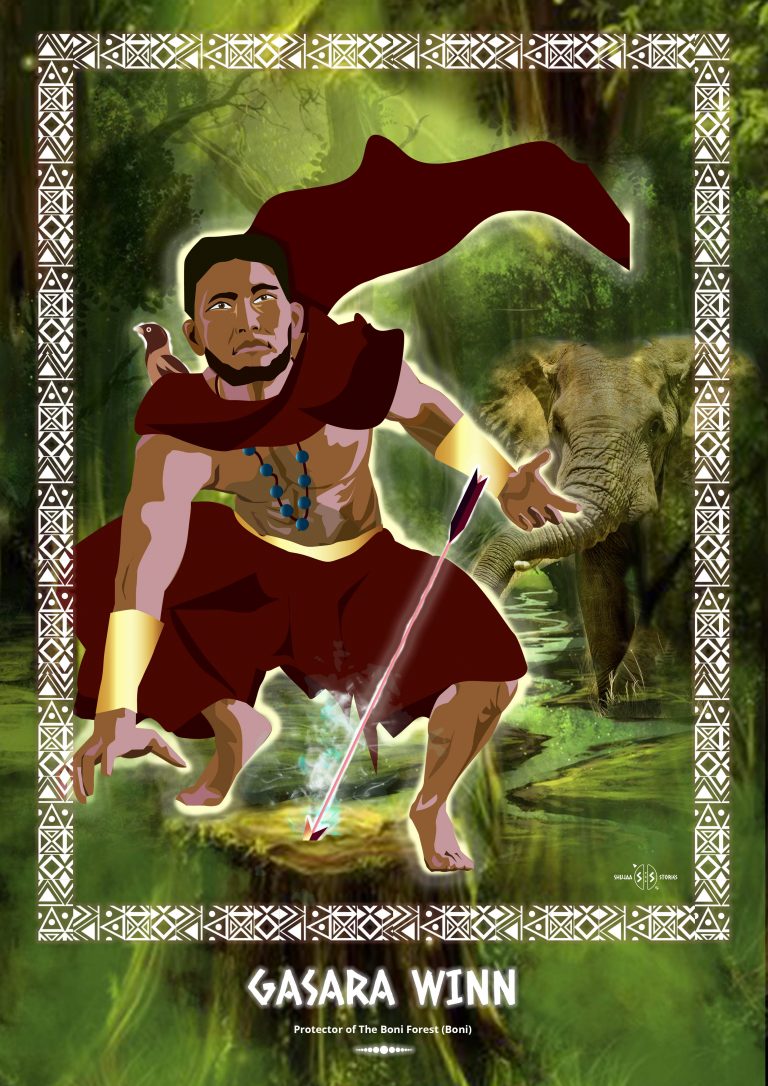 The Protector Of The Forest (Boni)

Gasara Winn was a legendary hunter among the Aweer.  But who are the Aweer? The Aweer are indigenous forest dwellers who inhabit the Boni National Reserve situated in Garissa County in the North-Eastern region of Kenya. The forest is an indigenous open canopy and part of the Northern Zanzibar-Inhambane coastal forest mosaic. It harbours densities of plant species that are among the highest in the world and it has been declared a biodiversity hotspot. The Boni forest is also renowned for its large herds of elephants.

The Aweer diet traditionally consisted of up to 70% plant-based foods, including bush berries, nuts, tubers and melons gathered primarily by women. The remaining 30% was meat, hunted by the men, using poisoned arrows and spears. In the present day, however, the Aweer practice shifting cultivation.

The Aweer do not have a paramount leader, decisions are made by consensus. The division of labor among Aweer is based on traditional gender roles and are very distinct and rarely overlap. The roles are based on daily survival needs, encouraging the most efficient utilization of available skills and resources between the genders.

The most important ingredient in the Aweer’s diet is honey, which is tracked down with the help of Mirsi bird, commonly described as honey guides. The birds feed on wax and bee larvae. The Aweer and the Mirsi bird have developed a symbiotic relationship over time. Mirsi birds lead hunters to trees concealing hives and alert them by making a specific call. In return the hunter opens the hive allowing the bird to eat.

The legendary Gasara Winn was born into the Weritama clan of the Aweer. He grew into a brilliant young boy.  Through  apprenticeship he learnt  hunting skills at an early age and would roam the forest without fear. Through his adventurers, he learned about the forest’s rich biodiversity. While still a young boy he befriended the mythical Mirsi bird, a honey guide which led him to the best hives. The Mirsi he befriended also acted as his protector, warning Gasara of any danger as he explored the forest.

According to legend, Gasara was a protector and the first conservationist of the Boni forest. He lived deep in the forest, caring for it and its wildlife. It is said that Gasara only hunted to cull extra animals and weed out extra plants to maintain ecological balance. When he became an adult, Gasara was a hunter and great lover of meat. He once used poisoned arrows to kill a raging bull elephant that had become a nuisance to his people and ate it all by himself.

Today, the Aweer are faced with dilemmas of modernity, dwindling wildlife resources and invasion of ‘foreign cultural practices!’ They long for the time of Gasara Winn who protected their forest.

The Boni National Reserve is situated in Garissa County in the North-Eastern region of Kenya. The Boni Forest is named after the reserve and is an indigenous open canopy forest  and part of the Northern Zanzibar-Inhambane coastal forest mosaic. It contains plant species densities which are among the highest in the world, The forest has been declared a biodiversity hotspot and is renowned for its large herds of elephants.