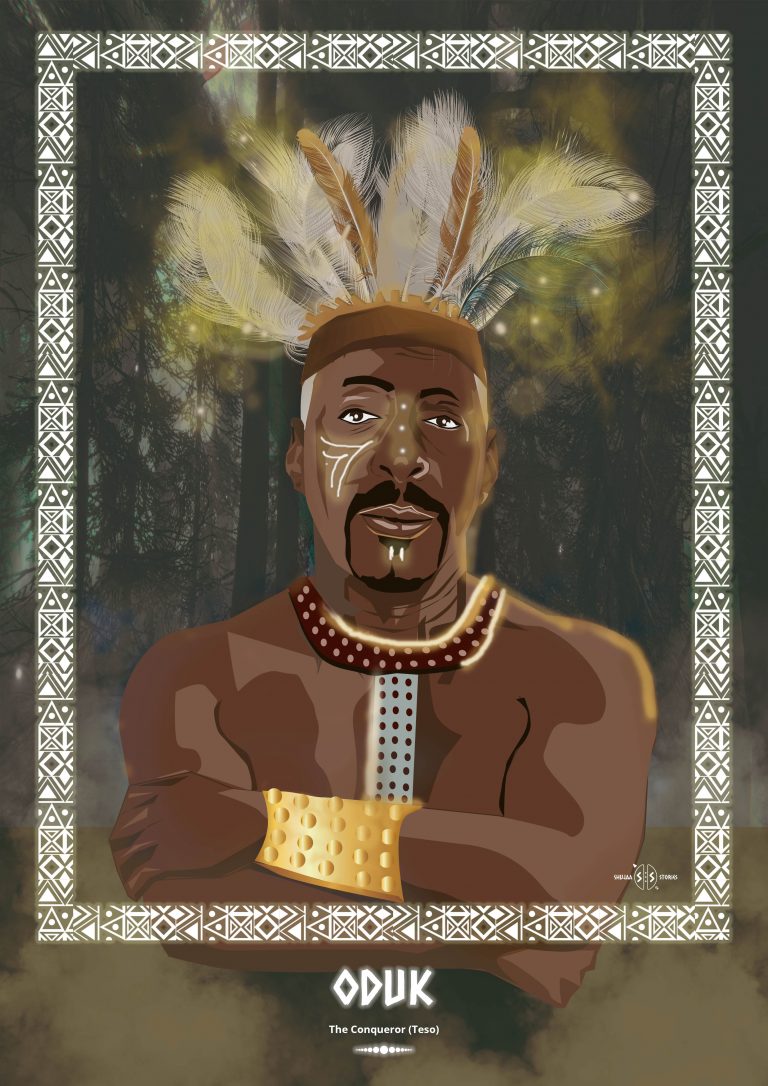 ince the beginning of time, the Iteso people have believed that they are sons and daughters of legendary Oduk and his wife Among’in. Oduk and Among’in were both Emuro, a diviner who doubles as a leader of etam (the highest political office).

Oduk and his wife helped the Iteso migrate from Uganda to their present homeland, Busia county around 1500A.D.

Oduk, a field-marshal, led them from southern Sudan to Uganda. He was helped by his wife, prophetess Among’in. Iteso migration was extensive and aggressive. It left them in control of a large swath of territory which extended as far as the western highlands of Kenya by 1850.

Oduk organized Iteso into territorial units called Itemwan (fireplaces). These were the largest political units for defence. An Itemwan was led by a successful war leader.

With the prophetic help of Among’in (She even prophesied the coming of the Europeans), Iteso managed to win many battles over their opponents such as the Ababukusu, Abagishu, Sabaot and Karamajong, by foreseeing the attack plans of the opponents.

Legend has it that Among’in was consulted far and wide for her wise counsel, battle premonitions and plans. She assisted Ajeet,  the greatest female warrior of Ngariam(Uganda), in a battle against the feared Karamojong warriors. Also, Okuko Oguti was among the warriors of the time who implemented Among’in war strategy to conquer the Luo-Padhola and Ababukusu in Tororo area.

The Iteso had rich cultural practices. One ritual was associated with the retirement of men from the status of an elder. Once these rituals were performed, retired men could no longer marry and were believed to have privileged access to the divinity.

Oduk implored the Iteso to believe in a divinity with different features called Akuj (high) or Edeke (illness). Other enchanting features of this divinity included the Ajokin, little spirits of the bush, who invited people they came across to feast as long as they kept the invitation a secret. He appeased the Ipara,(spirits of the dead) who feature prominently in the lives of the Iteso.  The Ipara are selfish and do not enforce good behavior. When they possess people, the Ipara bring with them exotic spirits from other cultures who harm or make ill the people they possess.

Oduk taught the Iteso that at death, the body is separated from its Eparait (spirit), which goes to live in the bush. The spirit ideally moves deeper and deeper into the bush, but in practice many spirits return to bother the living. He advised his people that the spirits of the dead are greedy; they require offerings of food and drink. He told them that the skeletons of dead people should be exhumed after a number of years so that rituals can be performed to “cool” them and make them more kind to the living.

The older Iteso continue to observe Oduk’s teachings but with today’s modern influence on culture they are concerned that their children will bury them in coffins and prevent this practice, thus suffocating the dead in the earth.

Funeral rituals are a major focus of Iteso traditional life and many Iteso point out that these rituals are a primary reason for having children: “Without children, who will sacrifice at the head of your grave?”.

The Iteso people live in Western Province of Kenya, currently in Busia County, in the South of Mt. Elgon. Mt. Elgon isan extinct shield volcano on the border of Uganda and Kenya, north of Kisumu and west of Kitale. The mountain’s highest point, named “Wagagai”, is located entirely within Uganda. Although there is no verifiable evidence of its earliest volcanic activity, geologists estimate that Mt Elgon is at least 24 million years old, making it the oldest extinct volcano in East Africa. The mountain is the catchment area for several rivers such as the Suam River, which becomes the Turkwel downstream and drains into Lake Turkana, and the Nzoia River and the Lwakhakha River, which flow to Lake Victoria. The town of Kitale is at the foothills of the mountain. The area around the mountain is protected by two Mt Elgon National Parks, one on each side of the international border.