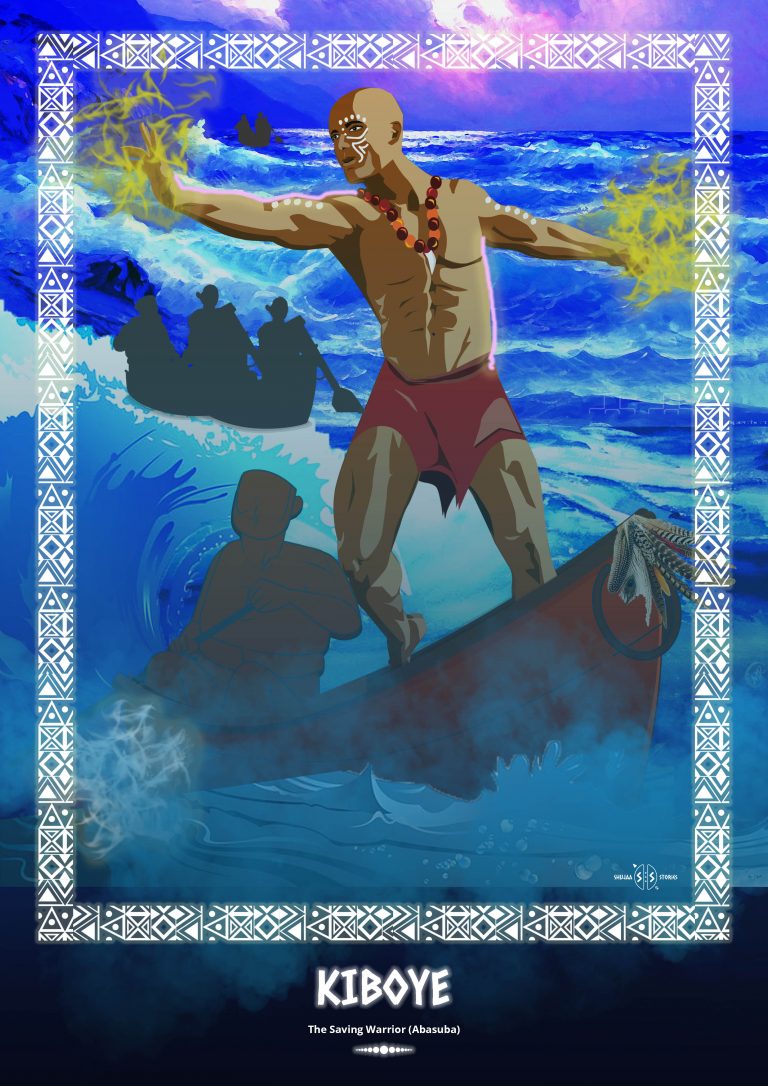 The canoe violently rocked back and forth, and some water entered Kiboye’s eyes. He cursed lightly under his breath as he looked into the waters that surrounded the canoe. The waves were rising and crashing against the canoe, startling its occupants and making them shiver with fear and cold. Kiboye was anxious, he knew that the lake was angry but what he wasn’t sure of is if she was angry because of what he’d done or because he had fled shortly after.

A few moons back, Kiboye was in Buganda Kingdom minding his business, when some interesting news reached him. Semakooikoro, who had been exiled by his brother, Kabaka Jjunju, was planning to forcefully take Kabaka’s seat from his brother. Semakooikoro’s brother was the rightful heir.

Life was about to get exciting, Kiboye thought to himself.

A rebel army, the Abakantu, who later became the ancestors of the Abasuba, was formed. An attack was carefully planned. It was windy when the plan was set into motion. Kabaka Jjunju was killed and Kiboye, drunk on the Abakantu’s victory, cut off the dead man’s penis.

Semakooikoro was horrified when he heard the news. The mission had gone so terribly wrong. Killing Jjunju was not part of the plan. As the newly appointed Kabaka, Jjunju’s death would tarnish his reputation. Therefore, he ordered for the Abakantus to be killed. However, when the Abakantu learned about this plan, they fled, led by Kiboye. That was how they found themselves on the rocky waters of Lake Nalubaale, sailing away to an unknown destination.

After what seemed like days, they arrived at an island, Mfangano Island. Kiboye’s brother, Wetewe, decided to stay on this island with part of the group.  Kiboye and the remaining  people proceeded with the journey. They soon arrived at another island named Eluzinga, which means island in Suba. However, as the two groups settled in  their new homes, internal wars started between them. And so, for the four decades preceding colonial domination, the two groups constantly jostled for power over the two islands.

The legend of Kiboye, the saving warrior, continues to be passed down generations as a reminder of how the Abasuba people were banished from the Buganda Kingdom. It is also the story of how the Abasuba first set foot in Rusinga and Mfangano Islands on Kenyan soil, led by Kiboye.

Islands such as Rusinga which are located within Lake Victoria are important nesting sites for migratory birds. They are also spawning grounds for fish. This may have played an important role in why the Suba people settled in such an area — nature would provide food and other essential services for them.