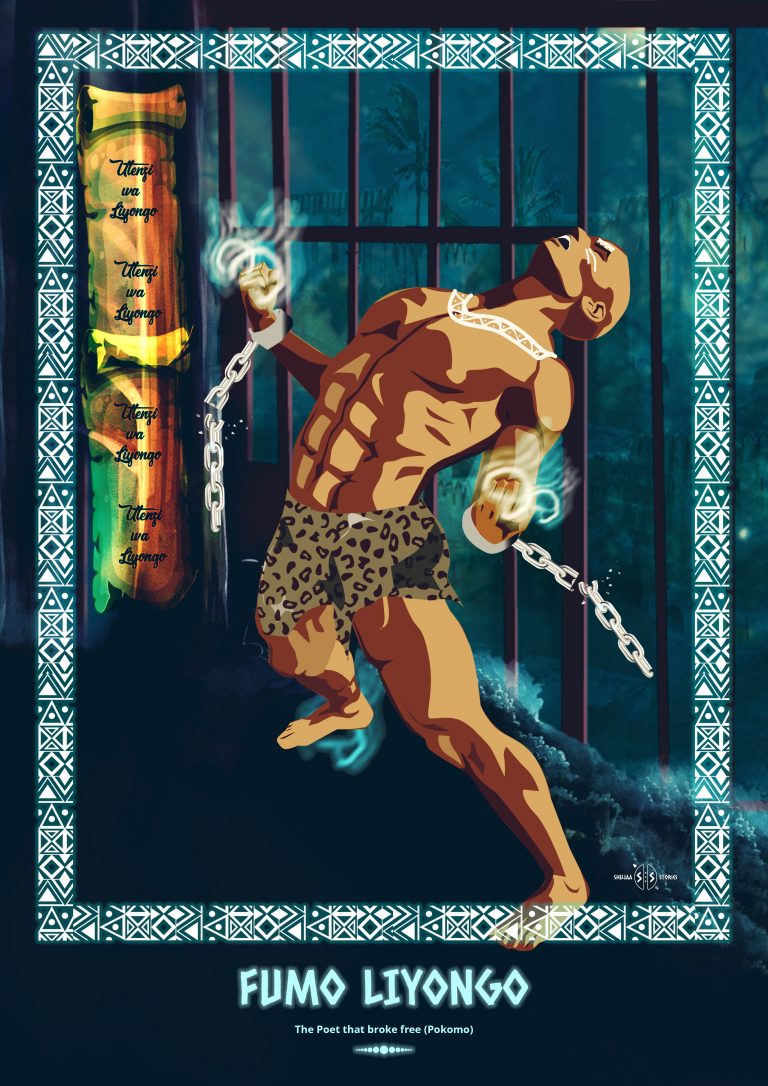 The Poet That Broke Free (Pokomo)

Around 800 A.D, somewhere along the delta of the Tana River, north of the East African Coast, a sturdy bright-eyed boy stands on a rock watching the hunters return, their bows tightly clutched in their hands.

The boy looks around and takes it all in; the simple life of women preparing the millet, the children playing and the hunters settling down. If anyone would have told him that this was how his life would turn out, he would have laughed in the person’s face and told him to get out of his sight. You see the boy, Fumo Liyongo, was the son of the ruler of the city-state of Shaka; he was a royal and the heir-apparent to the throne. That is, until one day when it all came crashing down.

One evening, as the sun was setting, it lit the sky with a strange almost foreboding shade of orange. This was soon replaced by an eerie darkness. Maybe it was a sign from the universe; a sign that the strange sunset marked the end of life as the people of the city-state of Shaka knew it.

Their ruler had just died, leaving behind two sons; Fumo Liyongo the older and Mringwari the younger. Shortly after their father’s death, in a turn of unexpected events, Mringwari was made ruler and Liyongo was imprisoned. Perhaps courage was Fumo Liyongo’s middle name because somehow, he managed to free himself from the clutches of bondage and fled to the mainland.

There, he adapted to the new lifestyle. He put the aristocratic life of the coastal Arabs aside and took to the present life that revolved around eating millet, hunting with bows, ‘dancing with the drum’ and drinking from forest pools. It wasn’t all sadness and gloom for Liyongo. He soon built a reputation of bravery, generosity and justice, and became the ruler of a new state.

His abilities as a ruler were crowned by the qualities he developed while living in exile. The kindness, self-sufficiency, and communal responsibility of ‘the men of the bush’ blended well with the nobility of his royal blood. So noble was he that, to date, the very mention of his name elicits an emotional response among the coastal communities of the Pokomo and Swahili.

Liyongo is best remembered through his poetry. An exquisitely skilled poet, many of the poems praising him are said to have been composed by him (talk about taking self-love to the next level!).

There are nine Swahili poems making up the story of Liyongo. The first eight are well known Swahili songs, most of which were first written down in the late 19th Century, though they are probably much older than that. The ninth poem is an extract from The Epic of Liyongo, composed in 1913 by Muhammad Kijuma, one of the greatest Swahili poets.

Today, there are many different versions of the Liyongo legend, as well as academic debates centred on the personality of the legend. Fumo Liyongo is said to have lived somewhere between the 9th and 13th century. He remains a hero to the Pokomo and Swahili in particular and to Kenyans as a whole. His story inspires many and his legend continues to live on.

The home of Liyongo, Tana River Delta faces a lot of threats which include incompatible land uses, climate change and degradation. If nothing is done to save such sites, we will lose a part of our culture and important biodiversity.