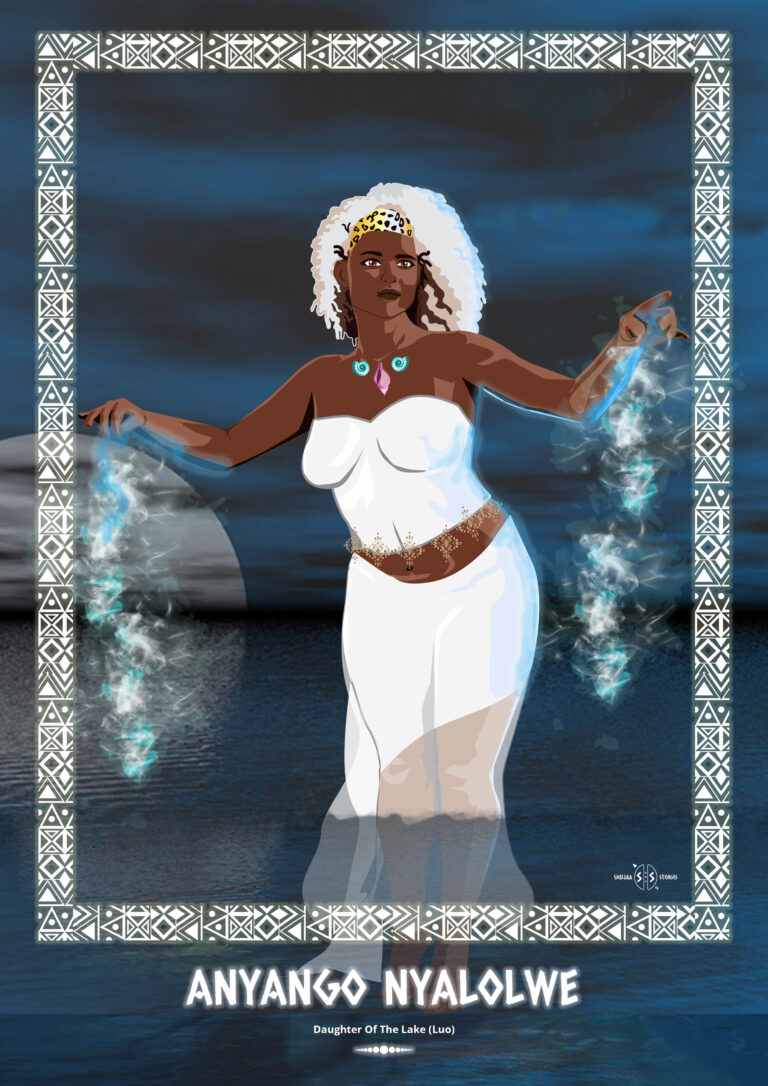 Daughter of the Lake (Luo)

They say hell hath no wrath like a woman scorned. Just ask Anyango.

Anyango, popularly known as Nyamgondho’s wife, was from the Lake Victoria region of Kenya. Her origins remain unknown to this day. Legend has it that she was a goddess. Her name, Anyango Nyar Gwassi, means Anyango the daughter of Gwassi.

One day, Anyango was by the lakeside when Nyamgondho, then a lowly fisherman, stumbled upon her. She asked him to take her back to the mainland so that she could get a fire and warm herself. He agreed but before they left, she asked him to go and untie her goat and bring it with them. The two then left together.

Nyamgondho was good to her and after some time, they ended up getting married. Through Anyango and her goat, Nyamgondho was able to amass wealth that was beyond his wildest dreams. For a period of time, their lives were perfect.

Then trouble began to brew in paradise. Nyamgondho married other wives and started to go out often. Initially, Anyango had no problem with either the other wives or the drinking. However, things spiralled out of control and he soon became a drunkard.

“You can go out, drink and marry as many wives as you want,” Anyango warned him, “But the day you abuse me or any of the other wives because of your drink…you will live to regret it!”

Yet, despite her warnings, Nyamgondho ended up doing the very thing he was not supposed to do. Anyango, incensed and disappointed, got up, gathered all the wives and the livestock and headed back into the lake from whence she came. Nyamgondho was left by the lakeside, as poor and as desolate as he was when they first met.

It is said that as Anyango and the animals disappeared into the deep waters of Lake Victoria, Nyamgondho, feeling the pain of his total loss, stood on the water’s edge, rested his chin on his walking stick and was mysteriously transformed into a tree. To this day one can still see the footprints of Nyamgondho’s family and the animals entering the lake and the tree into which Nyamgondho was transformed into.

This is just one of Anyango’s many tales. She is believed to be the same woman who performed several other supernatural acts on the shores of Lake Victoria, including the sinking of Simbi Nyaima in Rachuonyo District (Kendu Bay). She is also believed to have once raised Gor Mahia from the dead.